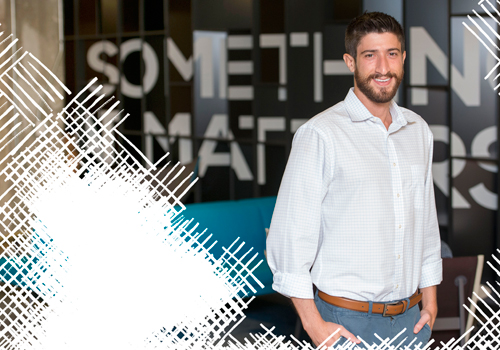 There is an axiom lately that younger dentists just don’t have the same drive or entrepreneurial spirit once identified as a hallmark of the profession.

Instead, the stereotyping says young dentists are risk-averse, don’t want to scrimp and save to venture into the dog-eat-dog world of small business ownership, and would rather work for a lucrative salary so they can plunk down monthly payments for a shiny new “beamer.”

However, there’s a 29-year-old named Scott Drucker who splits his time between nurturing a start-up business in a health care incubator hub in the Merchandise Mart and traveling the country supporting that business, and also spends a day practicing dentistry at an office more than 40 miles from his home.

He begs to differ with that stereotype of the young dentist.

“I know several other young dentists who have super innovative technology platforms, devices that they are creating, the ones diving into the tele-dental world. . . I would actually argue quite the contrary,” he said.

Dr. Drucker does not fit into the risk-averse category.

He grew up in South Florida, where both his parents practice medicine; they encouraged him to consider becoming a dentist.

“Growing up I heard all of the positives, but also all of the negatives, about the health care system that we work in here in the states,” he said.

After shadowing a dentist, he decided dentistry was the profession for him. After receiving his dental degree in 2013 from the University of Pennsylvania School of Dental Medicine, he moved to Chicago to take a residency in periodontics at the University of Illinois at Chicago College of Dentistry, which he completed in 2016.

It was his residency that lead him to the idea that spun him into the entrepreneurial world.

His business idea grew out of his residency acceptance letter from the University of Illinois at Chicago College of Dentistry. The letter included a list of supplies he needed to buy. “You really don’t get any practice management education in dental school; it’s a weak point in dental education,” he said. “I had no idea what I needed to do with this list of products I received.”

Faculty members at Penn told him to call representatives at the big box medical supply distributorships.

But an online search showed Dr. Drucker that pricing was inconsistent.

And in looking into the business landscape, he realized an opportunity existed to do things differently with more efficiency and at lower cost. And with that, his web-based medical supply company, Supply Clinic, emerged.

He tapped his brother, Jacob, who was completing a joint program for an undergraduate degree in economics and a master’s in statistics at Harvard University, to join him. Dr. Drucker said he began building the business model during the summer between first and second year of residency.

As it turned out, he had extra time to devote to the business because of an approval delay for his residency research project. And during his second and third year of residency he accelerated his involvement in his online business. “My routine was that I would wake up at 5:30, I would do my didactic and residency-related work, then would go in and have an hour or two of classes or lectures in the morning, then have six to seven hours of patient care and surgery,” he said.

After that full day ended, he would go to the Merchandise Mart at 5 or 5:15 p.m. to “start his work day” and toil there until about 10:30 or 11 p.m. before going home to his River North apartment to get some sleep before starting the routine over again.

“Towards the end of my residency, I had a big decision to make,” Dr. Drucker said. “I had a couple of offers to work as a full-time periodontist in a couple of different practices.” But, he said, he decided that he would regret not pursuing his business idea more vigorously.

He said those changes will either be driven by corporate entities that have their best interest in mind or those in the dental community who can drive that change and make things “efficient with the best interest of dentists in mind.”

“I know things are going to progress the way it has in every other industry,” he said. “And so I thought, hey, why not, I could be the individual who could drive that change.” His drive and commitment to the business did not go unnoticed.

His brother and he in May were named by Crain’s Chicago Business as two of the 20 people in their 20s who are change-makers in the Chicago business scene.

Besides working about one day per week as a periodontist in an office in Algonquin, Dr. Drucker also travels two days a week on business and to lecture at dental organizations and at dental schools.

“I think there are a lot of aspects with being an entrepreneur, running a startup company, a lot of similar aspects to being in a practice,” Dr. Drucker said. “You work as a team; I don’t work alone as a practicing dentist or periodontist. There are assistants and office staff, we are an entire team.”

His start-up business team has grown to seven full-time employees. Also independent contractors and some summer college interns are involved in the business.

Even though his business is growing, Dr. Drucker said he plans to always keep his hand in practicing dentistry.

“The nice thing about working the way I work is that I have full flexibility over my (dental) schedule so I can let the practice know of my availability, and the office will take care of scheduling surgery or follow-ups so I can spend my time devoted to running one business instead of two,” he said.

He and his brother have divided responsibility at the company. His brother is CEO and handles the internal aspects of the business.

As the company president, Dr. Drucker is the “outward facing” component, dealing with anything involving the dental world.

“I speak the language, so to speak,” Dr. Drucker said.