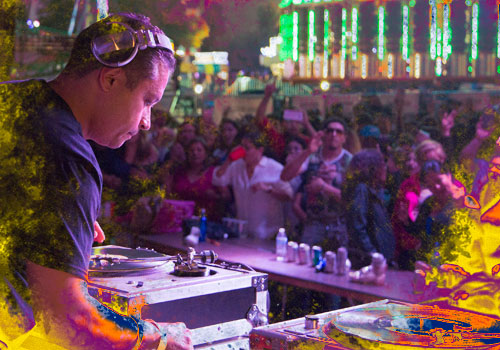 Before becoming Dr. Romo, he was Gino ‘Rockin’ Romo

While Genaro Romo was attending the University of Illinois at Chicago College of Dentistry, he led a double life.

During the week, he hit the books. But come the weekend, he became Gino “Rockin” Romo, a well-known DJ who was in high demand for parties, homecomings, proms and festivals, and was featured on a local radio program.

Dr. Romo grew up just as the Chicago House Music scene was getting hot and anyone who could make magic on the turntables was admired and popular.

“We were like minor celebrities at the time,” he said of himself and his fellow young DJs.

Dr. Romo credits the Little Village Boys and Girls Club for sparking his interest in both being a DJ and becoming a dentist.

“I have to give a lot of credit to the Boys Club,” Dr. Romo said of his successes. He started going to the club while in grammar school and when he was about 14 the club had a high school student who taught DJ classes. Every boy in the club signed up - but there was only one turntable and other kids got bored and dropped out. But not young Genaro. He and two others stuck it out.

The club also had a 10-watt radio station, WCYC 90.5 FM, run by volunteers. On Friday nights the station ran a popular Hot Mix show, playing the recordings of five or six DJs. One of Dr. Romo’s mixes was selected for airplay, and from then on he was a regular radio presence. And even though the broadcast only went out a few miles, the Friday night show was very popular, he said. He still has people tell him they remember his show.

But Dr. Romo said that the glare of being a local celebrity never blinded him to his goal of becoming a dentist. He grew up near the University of Illinois Medical Center, and would hear the ambulances and see the action involved with health care.

“Something always intrigued me to be in a health profession,” he said. “I always wanted to help make people feel better.”

He considered dentistry after hearing a dentist describe his professional and personal life at an annual meeting of the Keystone Club, a youth leadership group associated with the Boys and Girls Club.

“I thought, ‘wow, this is kind of interesting.’ You’re still dealing with people’s health and it might be something I would be interested in doing,” Dr. Romo said. A talk with a UIC counselor convinced him to go into dentistry.

His work curtailed the DJ part of his life. After earning his dentistry degree in 1997, he built a six-dentist group practice in the Brighton Park neighborhood.

He said the years that he worked as a DJ on the weekends while going to college and dental school were valuable learning experiences that he uses to this day.

“I bought some speakers and I was doing weddings and homecoming dances and proms, and all of a sudden I got thrown into the business aspect of it,” Dr. Romo said. “It taught me a lot about business that carried over to what I do now in dentistry.”

Dr. Romo still carves out some time to do volunteer DJ work at his kids’ school or sports programs. He is asked often to perform, but family and his practice means he has limited time.

“I only do it if all the planets align correctly and I’m able to get away for that day, like when my kids have no sports and my wife is OK with it,” he said.

In June he was one of nine DJs to entertain the crowds at a church festival in Chicago.

And when he does perform he makes sure those asking understand he only uses vinyl records on dual turntables.

“I get a little bit embarrassed when I say I only do vinyl,” he said, “because people don’t use vinyl anymore. But a lot of the promoters say ‘That’s exactly what we want. We want someone to show how it used to be done, we want people to understand and see a lost art’.”

Staying “old school” means extra expense in having to buy duplicates of every record and cart around some heavy equipment.

“I have crates (full of records) that I have to carry, and these crates weigh about 50 pounds,” he said of his records. “Sometimes I’ll take about four or five crates. I’ll have a crate of slow music, a crate of English, a crate of Spanish, and a crate of different genres. It’s a pain in the neck.”

Although he enjoyed his time in the spotlight, Dr. Romo said making music a career was never a consideration. “My main focus was always school,” he said. “I really wanted to be a dentist more than anything. That’s what I wanted to do; I didn’t want to focus on DJing.”

Dr. Romo said his double life as a student and DJ was confusing to friends.

When he was in college and in dental school some of his classmates asked if ever did anything but study. And on the weekends his DJ friends asked if he had a life outside of the music scene because they always saw him at a party or at the radio station.