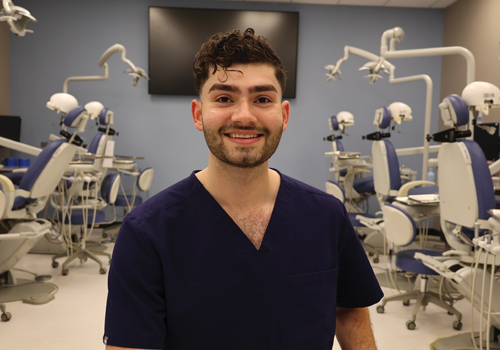 Anthony Baroud is a media star.

He doesn’t appear in a soap opera or a play a character in a sit-com or even on a reality TV show. His fame comes from a much more modern twist – he’s a social media celebrity.

The third-year student launched his YouTube channel called Dental Digest in September 2020 and has branched out into other social media platforms such as Instagram and TikTok.

In a short, snappy video format, he reviews toothbrushes and toothpastes and obviously has fun doing it. He has a routine down pat using plaque disclosing tablets and cheek retractors to show before and after results and give out an elongated “fat blob” as he slathers the toothpaste onto the brush.

By September 2021, he amassed 5 million subscribers to his YouTube channel, three months after reaching the 1 billion views mark.

But he doesn’t take that acclaim too seriously; in fact he had a little fun with his early fame.

After receiving the YouTube Golden PlayButton award in July, he took the large gold-colored metal plaque, which many YouTubers hold in high esteem, melted it down and made it into a toothbrush that he then reviewed.

The fun has a serious side, however, and that is to bring the importance of dental care to the masses, especially younger people who are his biggest fans. It also gives Mr. Baroud an outlet for his creative side.

“I didn’t have a background in video editing, but creation-wise my whole life I’ve been a creator, whether it’s messing around building a rocket when I was in middle school or building (with) Legos. I’ve always been a creator at heart and will always be a creator,” he said. Mr. Baroud said the past year has seen a shift in how video content is consumed, moving toward a vertical format video with short-form content, meaning videos about a narrow topic with quick-hitting presentations.

“I’m in a unique situation with timing, content and producing the content,” Mr. Baroud said. “I was at the start of that consumption, so I really hit a goldmine of timing and recognized that was really critical to the success of my channel, Dental Digest.” That effort, though, did not happen without planning and a vision.

He started brainstorming branding ideas in his first year in dental school. One idea, which he decided against, was a play on his name, AB Esthetic. In all he came up with about 50 ideas, he said. One was Dental Digest and he was surprised to learn that the name had no copyright or trademark.

Because he is an avid golfer, he said knew about Golf Digest magazine as well as well-known publications such as Reader’s Digest and Architectural Digest, so grabbing a good brand name with the word digest in it made sense.

He quickly moved to trademark the name and has greater plans for his “brand” beyond just a YouTube channel.

“I have this huge vision for Dental Digest and this is the start of it,” he said.

Having a creative outlet is one of the reasons he decided to enter dental school.

“It’s really rewarding,” he said about dentistry,” You have this goal in mind, this vision, of what you want to see be done to the teeth and you just bring it to life. That’s the best part,” he explained.

He said the hand skills and creative process required in dentistry is rewarding.

“There’s a lot to love (about dentistry), from creativity to the business side of it, the ability to improve, there are a lot of fun aspects about dentistry,” he said.

The video component of his life is challenging but a well-organized day helps him keep on track with both his side interest and his schoolwork.

A typical day finds Mr. Baroud waking up at about 6 a.m., working out for an hour and editing video, creating content or answering emails for another hour. Then it’s off to class from 9 to 11 a.m. He only lives about 5 minutes from the UIC campus so he takes a lunch break at home, chowing down on a premade meal and doing some video editing in between bites. He then heads back to UIC for clinical work from noon until 4 p.m.

“After clinic I’m brain dead,” he joked. “So for a half-hour I clean or walk around or hop on the bike.”

Filming, editing, holding business meetings, studying other content creators, and figuring out scripting takes up the rest of the day until about 11 p.m.

“I’m either in a school mindset or a content mindset; there’s no room for other things in the world, but I try to find a good balance,” he said, “I really enjoy the work. For me I enjoy the work so much it is my balance, it’s creative freedom for me to do it.”

It took about three months for his videos to start gaining traction. His first video was a review of blue light whitening kits and was about six minutes long. It took him more than a month for him to put it together.

“I can’t tell you the rush that I had, the amount of adrenaline I had, uploading that first video,” he remembers. “It was amazing.”

He said when he looks back he remembers how nervous he was, and the video format has changed tremendously since then. Now, he’s putting out two or three videos a week (about 140 total so far) and gaining more and more followers. He also started branching out to other dental-related longer form videos such as trying to escape a prison using floss.

“I had this vision from Day 1 on how big it’s going to be. I knew it was going to be as big as it is today. On YouTube I have little over 6 million subscribers, on TikTok I have 10 million and on Instagram I have about 37,000,” he revealed.

He said he knew his effort would be successful but didn’t anticipate it happening quite this quickly. His YouTube channel has a worldwide audience and at one point was the fastest growing channel in the world.

“I have this very unique style of content that is educational and entertainment,” he explained. “It is about finding your market, and my market was very luckily everybody, because everybody brushes their teeth.”