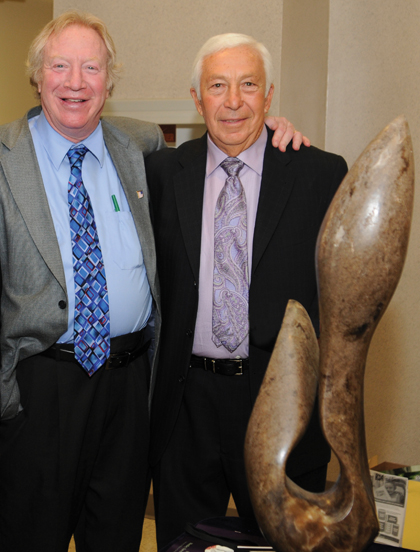 It was shortly after Sheldon Bulwa retired from dentistry that his wife stressed he couldn’t spend the rest of his retirement playing golf and tennis. So she signed him up for a sculpture course at the Boca Raton Museum of Art in Boca Raton, FL.

Five other dentists started the course alongside Dr. Bulwa. They learned the intricacies of sculpting stone manually, using a hammer and a chisel.

“Six dentists started the course, and I was the only one who finished because there is a lot of hard work involved. There is a lot of artistic thought involved,” said Dr. Bulwa, a 1955 graduate of the University of Illinois at Chicago (UIC) College of Dentistry. “It is more than hand-eye coordination or the skills we developed over the years in dentistry. It is something you want to put effort into.”

Dr. Bulwa spends three days a week in a studio in Florida sculpting for three hours at a time. He finds pleasure in donating his finished pieces to public places.

Sheldon BulwaBulwa-TeardropIn fact, on Nov. 22, his piece called The Tear Drop was installed at the UIC College of Dentistry to honor the late Irwin Robinson. Dr. Robinson was a past president of the Chicago Dental Society and an assistant professor at the college who died Aug. 30.

“My family was truly touched and honored that Dr. Robinson will be remembered for years to come with the beautiful sculpture Dr. Bulwa has dedicated in his honor. It is especially heartwarming that the statue will be placed in the Oral Surgery Dept., an area of the dental school that meant so much to my father,” said Chicago dentist James Robinson, a past director of the Chicago Dental Society. “My dad was an amateur painter, and this was a special part of his life. Therefore, it is wonderful and fitting that this memorial is in an art form — so aptly titled ‘The Tear Drop’.”

The sculpture is on permanent exhibit in the Department of Oral Surgery.

“(Dr. Robinson) was an instructor of mine when I was in dental school. We developed a friendship, and that friendship carried on for well over 50 years,” Dr. Bulwa said. “So it was an honor for me to donate the sculpture in his honor.”

When Dr. Bulwa isn’t sculpting in Florida, he ventures to Chicago during the warmer months and four months out of the year he goes to the Fine Art Studio of Rotblatt-Amrany in Highwood. Omri Amrany is known locally for his bronze sculptures of Michael Jordan outside the United Center and Harry Caray at Wrigley Field.

“I do a lot of sculpting,” said Dr. Bulwa. “It is more than just a hobby, it’s a major activity in my life.”

To make one of his sculptures, it is a four to five stage procedure of using carbide chisels, grinding stones, and different grades of sand paper.

“The key to carving is to know what you want at the end, to really sneak up on a piece in stages so you don’t remove too much material. With stone, you can’t make any mistakes,” said Dr. Bulwa.

Dr. Bulwa dreams up ideas for his sculptures by looking at other pieces of artwork and then developing them into his own idea.

“I think [sculpting] is what keeps me going, keeps me young, keeps my mind active,” said Dr. Bulwa. “It’s one of the best things that’s happened to me, because in retirement you can get a little lazy.”

Quick facts about The Tear Drop