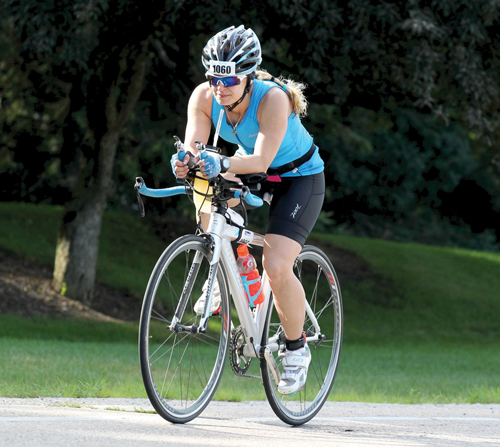 Try to keep up with Sharon Horwitz

Sharon Horwitz is on the run – literally.

Dr. Horwitz keeps a busy Oak Park practice, but what keeps her on the go is a training schedule of running, swimming and bicycling to stay in shape for triathlon races.

Most recently, Dr. Horwitz completed the Illinois Olympic Distance Triathlon Championship in Crystal Lake – finishing 5th in her 35-39 age group. She then topped it off with a grueling half-Ironman 70.3 mile competition in Racine, WI, that included a 1.2-mile swim in Lake Michigan, a 56-mile bike ride and concluded with a 13.1-mile run.

“I’m constantly trying to challenge myself,” said Dr. Horwitz, who lives in Elmhurst with her husband.

Dr. Horwitz said she has always been an athlete, starting at age 4 when she began gymnastics. She competed in gymnastic competitions throughout the Midwest then transitioned to running and track and field events in high school. It wasn’t until 2005, when she graduated from the University of Illinois at Chicago College of Dentistry, that she set her sights on a new goal: “I thought, let’s try a triathlon.”

She didn’t post a great finish, but it was enough to whet her appetite for a new challenge.

With some 30 events under her belt since then, “I feel like a seasoned competitor,” Dr. Horwitz said.

For summertime events, she begins her training regimen in January with before- or after-work runs and visits to the gym – alternating running, bicycling and swimming – six days a week.

“It sounds wild, but all the years in gymnastics made me rock solid for dental school and for (triathlon) training,” she said. “It has helped me all my life, giving me a great foundation.”

Dr. Horwitz’s grandfather helped plant the seed for her dentistry career, approaching a good friend who owned a dental lab in Chicago to hire on the young Sharon for whatever needed doing. It was a job that lasted 10 years – through dental school – and gave her invaluable insight into the materials component of dentistry.

She credits her grandfather’s role, as well as encouragement from her parents, in her accomplishments. Looking back, “it makes me more grateful and appreciative toward my parents who have always been so supportive,” she said. “They literally have never missed any race or event where I was involved or being recognized for something.” And she still visits her grandfather, now 94, every Wednesday.

The camaraderie that develops among fellow runners has had professional consequences as well, Dr. Horwitz said. Several people she has met in different racing circuits have become patients. “They really understand me,” she said with a laugh.

After taking some time off to recharge her battery, Dr. Horwitz said she’s not sure what race is next, though another Ironman competition is a “definite possibility.”

Ms. Sisk is a freelance journalist working in the Chicago metropolitan area.