Recently the Chicago Dental Society member has taken on hobbies that keep him in one place but still entail straining and strengthening muscles.

After graduating from Loyola University School of Dentistry in 1991, Dr. Medhat worked at a large group practice for nine years before venturing on his own in Evanston. He then bought the practice of a retiring dentist in 2005 and now has two Chicago offices, one on the northwest side and another in Chicago’s Loop.

He decided on a career in dentistry because many of family members are in medicine, and he didn’t want to be a “slave to a hospital.”

“I saw, as a kid, the amount of time and hours my family members were investing, so then I decided that the next best thing would be to be my own boss and to do this,” he said.

When not working, he enjoys a physical lifestyle. Skiing, both water and snow, was an early pursuit.

Growing up in Chicago, his first forays on snow started down gentle, hard-packed Midwest runs. He later became a fan of the powdery wonder of Colorado skiing and is now a regular there.

“A friend of mine moved out to Telluride, CO, and then I started going out there from ’93 to ’97 consistently and just skied my brains out,” Dr. Medhat said. With all the sporting opportunities in Colorado, “there was a point when I wanted to move out there.”

The outdoors and the environment are important to Dr. Medhat.

“Mentally, physically and spiritually it’s very important for me to get back into nature through hiking and with skiing,” Dr. Medhat said.

The search for spirituality and calmness, at a time in his life when he was being stressed following a relationship break-up, also led Dr. Medhat about nine years ago to start practicing Bikram Yoga, also known as “Hot Yoga.”

“I wanted to make sure I kept my health, my sanity, and I needed to keep the office running,” he said.

A patient told him he looked stressed out and suggested Hot Yoga. He was familiar with yoga, having taken a few classes but was not heavily involved in it.

“I don’t know if I’ve always been a spiritual person, but I really tapped into it when I started this whole journey with Bikram Yoga, the Hot Yoga. … 105 degrees in the room with 40 percent humidity and it really tapped into a zone for me that was a real necessity at the time,” he said.

Being able to stay in that hot, humid, confined space was a challenge.

“The first few classes I was going to I would walk into it, I would stay about a half-hour and just have a panic attack and walk out, but I would keep going back until I could stay in the room for a half-hour then an hour, all the way up to 90 minutes,” he said.

During the 90 minutes, the instructor leads the class through 26 poses and two breathing exercises at the start and end.

Dr. Medhat takes classes about four times a week and sometimes goes twice in one day if his stress level is high. He also seeks out Bikram Yoga classes while on one of his many travels.

He said he has taken yoga classes in Finland, Spain, France and The Netherlands as well as domestically in Florida and Colorado.

He said yoga’s focus is on breathing, which has a calming effect, and the poses help release toxins in the body.

“It was really a pretty fantastic investment,” he said.

The yoga experience led him to another journey, which also has spiritual underpinnings. He has hiked the Camino de Santiago, also known as the Way of St. James, a network of pilgrimages that begins in the Pyrenees Mountains in France and ends at the shrine of the apostle St. James the Great in Galicia, Spain.

He didn’t have time to do the entire 500-mile route at once so he spread out the adventure over several years, starting in 2011 and ending in 2017. During that time he lost 40 pounds.

“I grabbed two of my friends, and we started doing little snippets at a time,” Dr. Medhat said. “It was really profound and moving and just a great period of my life, just through the walking and the meditation and breathing while walking for hours and hours and just reflecting on where I was, where I’m going, how I’m going there. . . it was just really quite something.” He credits yoga as helping him complete the hikes as well as helping him in some other pursuits such as Olympic weight training and kettle bell competitions. He said kettle bell and Olympic lifting contracts the muscles and tightens the body whereas yoga allows the body to relax and become more limber.

“The wonderful thing about it (yoga) and dentistry is you don’t put any strain on your wrists, but remarkably it builds a great amount of strength and taps into muscles that you had no idea existed and it really tightens and puts your organs back to where they need to be … it’s good stuff,” he said. “In dentistry, because we’re in this static posture, it really helps you tap into your core and keeps your shoulders stable and healthy, it keeps your arms healthy, it keeps your neck healthy.”

The benefits are not all physical, he said.

“It reduces the chatter that is constantly in your head, and it helps to acknowledge it and note that it’s there and just lets it pass,” he explained. 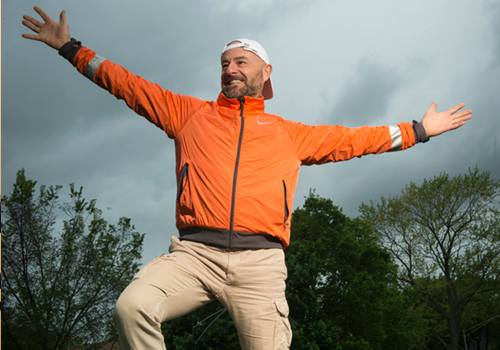