There was a time when Michael Barrows just didn’t feel much pride about serving in the army during the Vietnam War era. The CDS member completed two years of active duty in 1975 after participating in the army’s Health Professions Scholarship Program to pay for his dental education at the University of Illinois at Chicago College of Dentistry.

He accepted a commission as a second lieutenant in 1973; he left active duty as a captain. He also spent time as an inactive reservist.

The mood in the country in the early ’70s was tense with many Americans still angry about the country’s involvement in the Southeast Asia conflict. And even though troops were pulled out of Vietnam in 1973 and the war officially ended in 1975, it is no surprise that Dr. Barrows didn’t view his service time proudly.

But he said he thinks Americans misplaced their wrath.

“Instead of taking out their anger just on the politicians, they took their anger out on the troops,” Dr. Barrows said.

“They (the troops) didn’t come back to cheering.”

And while he was not a combat veteran, the toxic atmosphere affected him, too.

“I was made to feel ashamed by my country,” Dr. Barrows said. “I was ashamed of my service.”

But those feelings changed in dramatic fashion one day in 2011 when he visited his grandson’s grade school, North Grove Elementary in Sycamore, for a Veterans Day ceremony.

It was an experience that altered his life and his outlook. “I had never done anything like that before,” Dr. Barrows said of participating in a Veterans Day school event. “They lined us (a group of veterans) all up and the kids went into the gym and we came in single file. Everybody was standing up and clapping and cheering us and thanking us for our service. I had never before in my life been thanked for my service.”

That recognition was overwhelming and cathartic. “After that, I went out to my car and cried for about a half-hour. I still get choked up now just talking about it,” he said, his voice cracking.

That showing of gratitude made Dr. Barrows reconsider his feelings about his military service. “I wasn’t in the war in Vietnam, even though I served during the Vietnam era, but I saw the damage it did to the guys who were in the war. Now, I’m proud as hell to be a veteran.”

He decided to change the focus of his retirement and made it his mission to help fellow veterans as much as possible.

“I joined the American Legion and I’m the service officer so I tell the guys how to get needed services,” he explained.

An endodontist, he was in a group practice in Oak Lawn and taught part-time at UIC and Prairie State University.

In 1991, he was diagnosed with multiple sclerosis but was determined to keep working until the disease prohibited him from continuing. He transitioned to teaching full-time at UIC and retired in 2013 as the director of the college’s endodontic clinic.

With retirement, his desire to give back to other veterans was renewed.

He spends at least two days a week, sometimes more, helping out at the Illinois Veterans’ Home in Manteno, near Kankakee.

“I just really grieve for the Vietnam guys down there,” he said of residents in the home. “I was against the war, but the soldiers didn’t ask to go to that war; they were drafted. And instead of running to Canada or burning their draft card, they went.”

Dr. Barrow’s sense of pride is also on public display.

Visitors to the First Division Museum at Cantigny Park in Wheaton – which recently underwent a $7.8 million renovation – can watch a video of Dr. Barrows detailing his military experience as part of the museum’s new Soldier Stories series.

He often wears his old army field jacket in winter because it is so warm. Recently he was at a store check-out when the clerk noticed the jacket and asked him if he was “military.” Dr. Barrows proudly said “yes,” and the clerk gave him a 10 percent discount.

“I said, ‘thank you for giving me that military discount,’ and he stopped me and said, ‘No, thank you for your service.’ I about broke down again.” 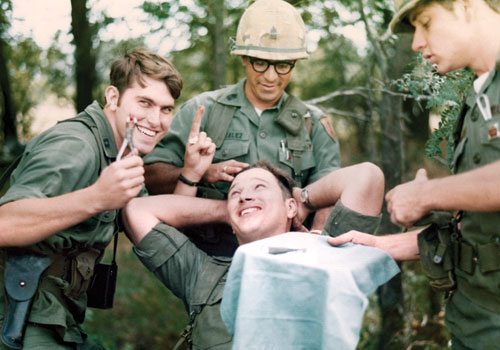