Lord of the Snacks: Larry Kolar is a band booster extraordinaire

Some do only the minimum, showing up once a year to hand out bottled water to young musicians who have just played their hearts out performing a brass-heavy, bass-drum-pounding rendition of The Beatles’ “Eleanor Rigby” during the football half-time show.

The CDS member is the ultimate band parent volunteer.

For the past eight years, as his two children went through the Maine South High School music program, he has been in charge of gathering and passing out snacks and beverages to band members.

Because his daughter Stephanie is graduating from the Park Ridge school this year, his family decided to do something special.

“This is my final year, and my wife (Lisa) and I decided to go out with a big bang,” Dr. Kolar said. They decided to pay for all the snacks and beverages for the year. “You have all these snacks, it doesn’t sound like much, but you have kids eating anywhere between two to four snacks.”

He said with 180 students in the band and the numerous events, home football games, parades and many others, it adds up.

“The kids in the band are very appreciative,” he said.

As a way to honor him, students made up a special band T-shirt emblazoned with his given nickname – “Snack Lord.”

“Anytime there’s something going on (at the school) I always wear my Snack Lord T-shirt, it’s a lot of fun,” Dr. Kolar said.

“I have a really good rapport with high school kids, especially the band kids, because I’m the one who feeds them,” he explained. “Believe me, kids between 14 and 18, if you feed them all the time you’ll have no problem with them.”

“It’s so obvious that the kids love and appreciate him,” said David Hutter, who has been the director of bands at Maine South for four years. “He is a really special parent and an important cog in this machine.” That mutual respect is evident by the way kids treat him, Mr. Hutter said. For example, before Thanksgiving break students were given an assignment to write thank you cards to anyone they wanted. Dr. Kolar was the top recipient, getting more cards than even popular teachers or administrators.

His love of band goes back to his own high school days when he says he was “married to the band room, that was my hang out.” Both of his parents volunteered when he was playing the clarinet in the marching band at Ridgewood High School in Norridge during the early 1970s.

He continued his interest in music through college, playing clarinet and also saxophone professionally in a band part time before, during and after gaining his dental degree from the University of Illinois at Chicago College of Dentistry in 1982. He has a private practice in Chicago near Park Ridge, where he lives.

“My wife and I volunteered to be a part of the music boosters back when the kids were in grade school,” Dr. Kolar explained. That means he has been active in band since his son, Brad, who is now 21 and attends Oakton Community College, was in fifth grade. For a time, when his son was in high school and his daughter was in grade school, he was involved in two different music booster clubs at the same time. Whenever he saw that he had a booster meeting on his calendar, he had to stop and think where he needed to go, the high school or Emerson Middle School in Park Ridge.

And even though his nickname is “Snack Lord,” handing out treats is only a small portion of what he does for the band boosters. He also helps chaperone when travel is needed and helps usher school musicals or concerts. He said some weeks he spends about eight hours helping out.

Mr. Hutter said when Dr. Kolar chaperones on trips it is a comfort for parents to know there is someone with health care knowledge in attendance. Dr. Kolar said so far he hasn’t had to help with any dental emergencies, but has tended to a girl with a badly cut foot and kids who have come down with the flu. His background in music makes it easy to interact with students and he has even, on occasion, filled in playing alto saxophone with the pep band at a basketball game when the band is short-handed.

He added that all the time he has spent on his volunteer efforts is worthwhile.

“It’s great to be part of the community, it’s a social event,” he said. “These kids are from the neighborhood, so I know them. It’s my hobby. People have different things as a hobby, this is my hobby.”

And when that hobby ends, Dr. Kolar said he will be increasing his musical practice time and joining the Jazz Community Big Band, a local music group, to keep his hand in music.

“Some of the (Maine South) alumni who I used to work with there at the high school are part of the band, so I will be working with some of them as well as some people my own age,” he said.

It seems natural that he would gravitate to an endeavor that includes young people.

“He puts himself to the side to help these kids,” Mr. Hutter said. “He’s affected hundreds if not thousands of kids during the long time he has given to the program. He’s the first parent here, and the last parent to leave.” 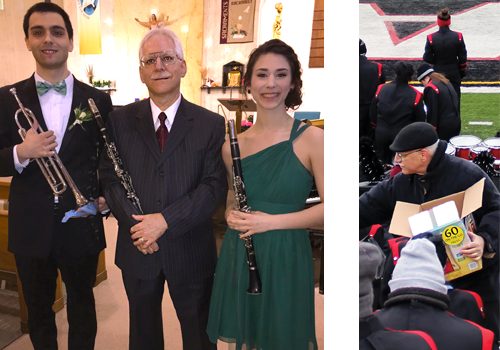