Walk for a cause, prompted by love

Oral cancer will strike almost 50,000 this year, according to the Oral Cancer Foundation, killing about 9,750, which means about one person an hour, 24 hours a day, dies from the disease in the United States.

That death rate is higher than more publicly recognized cancers such as cervical cancer, Hodgkin’s lymphoma or laryngeal cancer, according to the foundation.

CDS member Josephine Chang Pallotto, like all dentists, is all too aware of the devastating impact that oral, as well as head and neck, cancers can deliver. That’s why when she learned that her mother, Susan Chang, was diagnosed with nasopharyngeal cancer the news hit her hard.

“When you know more it kind of hurts you more,” Dr. Pallotto said. “It was really shocking and pretty devastating because I knew what was to come, and I knew no matter what, if she was going to make it or not, it was going to be a tough road.”

Susan Chang, who moved to the United States from Taiwan when she was in her 20s, passed away at the age of 59.

Her death was a shock to Dr. Pallotto and she looked for a way to help cope with the stress of losing her mother. She decided to organize a charity walk to raise funds and awareness of oral cancer.

“Part of my grieving process was to just be active in the community and so that’s why I thought a walk would be suitable,” she said. Dr. Pallotto said she had been involved in an oral cancer walk as a dental student in New York, but, in the Chicago, area she had to drive more than an hour outside the city to attend a similar walk geared toward benefitting the fight against oral cancer.

So, she started her own.

That event worked well, and she decided to make it an annual happening.

This year’s walk was held Aug. 25 at the University of Illinois at Chicago’s Les Miller Field at Curtis Granderson Stadium. Pallotto’s family members, including her father, brother, her brother’s girlfriend and several cousins (who are more like sisters), flew in from California for both events.

More than 30 volunteers helped with this year’s event that attracted about 100 participants and raised more than $26,000 for the Oral Cancer Foundation.

“It gives me a purpose and I hope it is doing good,” Dr. Pallotto said of the walk. “And I like creating opportunities for other people to engage to do good for their community. Its nice to see other people willing to give up their free time and help out…that’s really cool to see.”

Organizing this year’s event was especially challenging for Dr. Pallotto who had her first child, a girl named Adeline, about four months before the walk.

“I didn’t want to not do it because I already committed to it so I wanted to see it through,” she said. “There was a lot going on and there was a lot to figure out, and I was pretty exhausted.”

Dr. Pallotto said thinking about her mother, who was a “very hard worker,” helped her stay on task. “She worked really hard,” Dr. Pallotto, said of her mother, “she had one of the strongest work ethics that I’ve ever seen.” Mrs. Chang worked for about 20 years at a bank starting with processing loans and eventually becoming the vice president of her department, Dr. Pallotto explained.

She was also the inspiration for Dr. Pallotto to become a dentist.

“When I was an undergrad, I was on track to do pre-med and when it came time to decide what entrance exam to take I decided that medicine just wasn’t for me,” Dr. Pallotto recalled. “My mom saw a prosthodontist and had a complex dental history and she told me I should look into dentistry.”

That inspired Dr. Pallotto to take some weekend dentistry courses at the University of California Los Angeles; she found she really liked it. She eventually went to New York University’s College of Dentistry, where she met her future husband, Anthony. She completed a General Practice Residency at Evanston Hospital through the University of Chicago and briefly taught at UIC. Eventually she took over her father-in-law’s dental practice in Lansing.

As for the future, Dr. Pallotto said she definitely plans to hold a third oral cancer walk next year, but the date and place has not been established.

One thing she does want to do is drum up interest among dental students at UIC. This year’s walk was held when the school was still on summer break and only one student participated.

“Next year I’m planning on doing it in September when school has already started,” she said.

And she would also like to get the word out to fellow CDS members.

“I want to reach out to CDS branch officers to get more people involved,” she said. 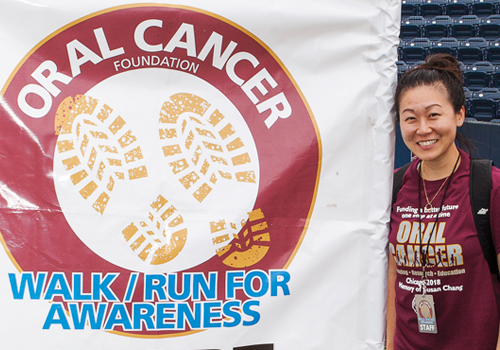