Jerry Udelson a dentist for all seasons

Quick, what do golf, glassblowing and motorcycle riding have in common?

If you’re left scratching your head trying to figure that out, don’t bother Googling it. The answer is Jerry Udelson of Riverside.

That’s because the pediatric dentist, who has practices in Forest Park and Elmhurst, plays golf, rides motorcycles and does glassblowing.

Many dentists have interests outside of the profession. But few have such disparate pursuits. And even fewer would install a eight-hole practice putting green in their basement to improve their game. Dr. Udelson has backed off a bit from glass blowing and motorcycle riding, but he is still an avid golfer and a member of Riverside Golf Club.

His dedication to the sport helped usher in another endeavor, a charity indoor putting tournament held in his basement.

When he built his home in Riverside, he made sure the house had plenty of space. His basement ceiling is 10-feet, six-inches high with no beams, so he had plenty of room to install a practice putting green. Five of the holes are on a flat surface, but three of them require players to negotiate undulations making the ball path mimic the curvilinear street pattern of Riverside.

The set up is perfect for hosting putting parties and his charity tournament.

“After being in the house for a little bit, I thought it would be great to have a tournament with friends,” he said. The first one, eight years ago, attracted about 30 participants and has since grown to 50. “I have the pros from Riverside Golf Club come over and run it for me, we charge an entry fee, we serve food and beverages,” he explained. Prizes such as golf clubs, golf lessons and tickets to sporting events are also donated.

Entry is by invitation only. Players are slotted into 10 groups of five and play a game of P-I-G in which players have to match shots or take a letter for a missed putt. The player who makes his opponent spell PIG wins and moves on to the next round until a champion is crowned.

While there is certainly fun and friendly competition involved, there is a serious and altruistic component. Proceeds are given to help a person in need.

This year the donations were “outstanding,” Dr. Udelson said, and they raised more than $5,000 that will go to a Riverside Golf Club employee, who has terminal cancer. “We try to help someone local,” he said.

Last year, the money was donated to a 12-year-old local girl who was diagnosed with myalgic encephalomyelitis, more commonly known as chronic fatigue syndrome.

“We raised some $3,000 for her, and we gave it just to her; we said we’re thinking about her. She was just so emotional, as was the family, because we don’t tell them about it ahead of time; we just show up.”

Other than the putting tournament, Dr. Udelson said he doesn’t get to use the practice green very much because of his busy schedule. His schedule also caused him to do less motorcycle riding and glass blowing.

He became interested in glassblowing after watching a documentary on famed glass artist Dale Chihuly.

“I thought, man, if I could ever do that I think I would really like it,” he said. His dental assistant told him about a glassblowing class at the Chicago Art Institute, and his dream was realized. He’s made vases, art objects, Christmas ornaments and crystal mementos for special events, like his wedding.

His interest in motorcycles started as a teen. It wasn’t too long ago after he graduated from the University of Tennessee College of Dentistry that he was taking road trips from New Mexico to Calgary, Canada, and along the Continental Divide. He’s also took riding trips in New Zealand, Germany, Switzerland, Austria and Italy. He lectured on pediatric dentistry at the University of Warsaw in Poland after the trips. A friend arranged for him to spend a week blowing glass at a famed Polish glass factory as well.

“After a day, the owner suspected I was a spy there to steal his secrets, so he kicked me out,” he said.

Having fun isn’t confined to his pastimes. Dr. Udelson looks at fun as essential even with more serious tasks.

After earning his dental degree at the University of Tennessee, he went to Indiana University Dental School for specialty training in pediatric dentistry.

“I have fun working on children,” he said. “I could never be an adult dentist. You can just have fun with kids,” he explained. 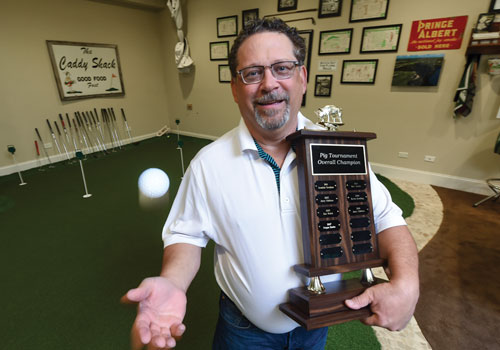