Grace Yum is a modern day renaissance woman, and mother. She is using all of the digital tools available to spread the word that dentists who are mothers can lean on each other, as well as learn from each other to help their businesses prosper and their families thrive.

Born in Chicago, the Chicago Dental Society member attended dental school at the University of Maryland in Baltimore and trained in pediatric dentistry at Children’s Memorial Hospital in Chicago from 2003 to 2005, opening her own practice in 2009. That practice, Yummy Dental and Orthodontics for Kids with locations in Chicago and Glenview, has since grown to seven associates including general, pediatric and orthodontic services. That’s the textbook move dentists have been doing for decades.

The future-forward accomplishments she has achieved in the past few years have a decidedly more digital feel.

In 2017, Dr. Yum founded a Facebook group called Mommy Dentists in Business after she attended her husband’s law firm retreat and realized other professionals who work in a large firm have a network that dentists working in a small practice don’t have. By late 2018, the group had become 5,100 members strong, attracting dentists who are moms from all over the country. She limits membership to women who are mothers and in private practice. She is also an author, publishing a book in 2018, also called “Mommy Dentists in Business,” which includes chapters written by other dentists who are mothers.

Dr. Yum also has a flare for the spoken word and was a communications major at Northwestern University and graduated from the School of Speech. Last year she launched a podcast that can be found on iTunes, Google Play and Stitcher Radio. “A year ago I had never even listened to a podcast, but the younger docs said ‘we listen to podcasts’!” she said. Her podcast has been in the top 50 podcasts on iTunes and has about 20,000 downloads. The podcasts are an extension of some of the more popular topics brought up in the Facebook group.

She said if a doctor threw out a topic (on Facebook) and it got a lot of feedback like comments and follows that topic would be expanded upon in the podcast.

For instance, she said someone in the Facebook group wrote a question concerning skincare, saying that their hands were breaking out using a certain type of glove, and asked for advice. The topic grew from a clinical one to a lifestyle one when one member wrote that she was pregnant and wanted to know how to avoid stretch marks on her stomach. Dr. Yum said she interviewed a dermatologist on the podcast to address skincare issues.

“I take things from the group that I see are popular and then I will try to find an expert in that area and interview them for about 30 or 40 minutes for the podcast,” Dr. Yum explained. She records her podcast on her day off or in the evening when her kids are asleep.

She has also appeared on the “TODAY” show as well as local television talk shows. Those appearances are not the result of her having an agent or pursuing the attention, but of producers using Google to find her. Speaking engagements at conferences and meetings focusing on social media use by dentists are also on her calendar. She is branching out on her talk topics to include how to juggle family, career and parenting, a theme that is cohesive with her Facebook venture.

“The Facebook group is becoming its own organization,” Dr. Yum said, “We throw live events and we had our first social summit at the East Bank Club in Chicago in September.” A hundred dentists attended the event and more are planned for April and June. “My vision for this group initially was just to bring moms in dentistry together, and just have a meeting space to support each other and share best practices,” Dr. Yum said. “But it is evolving into something much bigger, it is evolving into the idea of woman empowerment, bringing women in dentistry up to the forefront and how to include them in a speaking platform at large conferences.”

She said the goal is to break into the side of the dental world that encompasses education and leadership roles.

“We want to help women to stay involved and encourage women to stay in business,” Dr. Yum said, “I feel like many women, after having children, cut back either to part-time or they stop working altogether. So this group is to help support one another to stay working and to stay independent and basically show each other that we can do this.”

She said it is not easy for dentists to try to juggle motherhood and a career, and the issues that mothers who are dentists face are multi-layered.

“I think mothers really need a place where they can connect because we’re so limited on time, we are either practicing in our office or we’re with our children and family,” Dr. Yum said. “There is very little time to go to meetings because we don’t have childcare or our little ones need us. It’s hard to go and get CE and fly to another city if we want that continuing education.”

Dr. Yum said many women dentists wait until their children are more independent to become more active but that can hold them back.

“I feel like that period of our career will take a hit or get compromised somehow,” she said of the time raising children.

She said the beauty of the Facebook group is that it attracts from all age groups and the discussions run the gamut from clinical issues as well as the business side to what the members do as moms.

One topic discussed is that dentists who are moms tend to think they must be perfect but they have to realize there is no such thing as perfection and balancing a career and family might mean times when compromise is in order.

For instance, there may not be time to make that homemade Halloween costume.

“It’s OK to go to Target and get something, put it on them, and send them to school,” she said. “It’s OK not to be perfect. I think there is a lot of pressure on women to be perfect.” 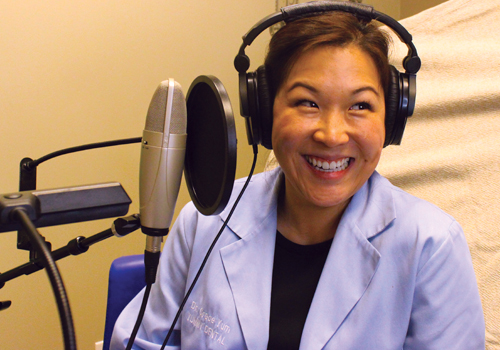