His sleep aid is as old as when man first plopped a vessel into a body of water.

You see, Dr. James – a 45-year Chicago Dental Society member and general dentist whose Michigan Avenue office in downtown Chicago has a glorious view of Lake Michigan – lives on a boat. . . year round.

The 53-foot, custom-made craft named the Venture On is his full-time residence, not only during warm months – when he’s surrounded by other watercraft and summer sailors at Burnham Harbor, tucked west of Northerly Island near Soldier Field – but also in the late fall and winter when he moves to the Chicago River’s south branch at River City Marina and Harbor, 800 S. Wells St. Dr. James moved aboard several years ago from a Gold Coast townhouse following a divorce.

He said he savors the “tranquility, and the beauty and serenity of the water around me.” The atmosphere “puts me at ease,” he said. “Where my boat is located during the summer (Burnham Harbor), I don’t hear any fire engines or ambulances or police cars. I don’t hear any car traffic.”

The calming effect is palpable.

“The rocking of the boat puts you to sleep, “ he said. “The gentle rocking is like a baby’s crib.”

The Venture On was designed as a live-aboard boat made with comfort and stability in mind. With its rounded hull, the 62-ton craft doesn’t rock to and fro as those with V-shaped hulls do. Jay Benford of the Benford Design Group, located in Maryland, designed the custom-built yacht, called a Florida Bay Coaster. It’s styled after the coastal freighters that work on the nation’s waterways, according to the Benford website, www.benford.us.

But unlike those workhorses, the boat includes all the comforts of home as its occupants cruise along the coast or, as Dr. James does now, mainly stay put.

Dr. James has owned the boat since 1996 and spent a good amount of time staying aboard on weekends as he took his two children – a son and daughter (a periodontist in Houston) who are now grown and on their own – on trips to one of the many ports along the Lake Michigan shoreline.

After graduating from University of Illinois at Chicago College of Dentistry in 1973 and acquiring his practice, he joined the United States Sail and Power Squadrons, a national organization manned by volunteer boaters who provide instruction on boating basics such as safety, navigation by the stars and engine maintenance.

Membership does not require boat ownership, but when he started to move up in the group’s ranks, it was suggested that he make that commitment.

A trip to a Florida boat show with fellow power squadron members resulted in finding a powerboat that fit his needs. The boat’s previous owner was a Drug Enforcement Agency officer who acquired it after the vessel was used as a decoy to catch drug runners near Miami.

“I always wanted to get a boat of my own, but you have certain economic priorities in your lives,” Dr. James said of why he delayed buying a boat.

The transition to a floating home was fairly easy, Dr. James said. Winter is no problem because the boat has excellent insulation and he can keep it comfortable using space heaters. Dr. James also uses a machine that churns the water around the boat when temperatures dip below freezing to keep ice from forming around the hull.

Although keeping a boat in ship-shape takes a lot of work, Dr. James said he welcomed the change from maintaining a house.

“A house unfortunately takes up a lot of time and effort to maintain, not just to clean but all of the mechanical stuff like the heating system, fixing door knobs – all that takes time and I was glad to give up the chore of maintaining that,” he said.

Moving from a large townhouse to a more confined space was a change, but the boat has plenty of storage space and generous living quarters, he said.

“Not too many people in Chicago live on a boat year-round, but for my situation it is quite comfortable,” he said of his floating home.

His means of commuting to his office on Michigan Avenue across from Millennium Park depends on his mood, the weather and what kind of workday he is expecting.

“I have four ways to commute, and I’ve done all four,” he said. “I can drive and park across from my office in the Millennium Park garage, but there are times when I can just walk into work. It’s a pleasant walk through Grant Park.”

He can also ride a bike or use one of two Segways, two-wheeled motorized transport vehicles, he keeps on the boat for shore excursions.

Dr. James’ gregarious nature is well suited to a living situation in which his neighbors come and go and his mooring location changes with the season. “I migrate back and forth like a bird,” Dr. James joked.

He said he socializes with fellow boaters and even started a tongue-in-cheek group for his winter neighbors called the “River City River Rats and Other Rodents Club, the Chicago Component of the International Society of River Rats and other Rodents.” The “other rodents” he explained are a family of raccoons that live near the facility.

Because of his position with the power squadron, Dr. James also became active in the Chicago Yachting Association, a conglomerate of boating groups in Chicago. He serves as the group’s vice commodore and is running to become next year’s commodore.

He’s also looking to slow down a bit and has put his practice up for sale but still wants to help with the transition. Until then, Dr. James said he’ll take the advice of his late father, an English immigrant who worked as a gardener, butler, chauffeur and handyman for a wealthy North Shore family, and “venture on.”

View a video (shown in fast-motion) of the Venture On’s trip from its winter home to Burnham Harbor in 2018. Pay attention to the 1:47 mark when the boat passes the CDS headquarters just past the DuSable Bridge at Michigan Avenue. 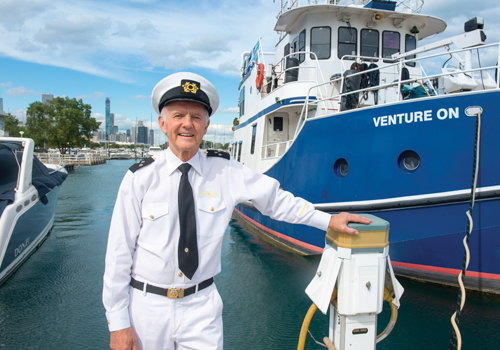