It’s not every day that you find a dental office with a connection to a famous record store that created somewhat of a cult following. Marvin Greene, who in 2011 purchased the landmark building that housed them both at different times, certainly didn’t realize the extent of the building’s history.

When Dr. Greene bought the office at 2449 N. Lincoln Avenue, he wasn’t fully aware that it had been the home of the famous Wax Trax! Records.

Wax Trax! Records opened in 1978 (the same year that Dr. Greene graduated from the Northwestern University School of Dentistry) in Chicago’s Lincoln Park neighborhood. It was located down the street from the famous Biograph Theater, where bank robber John Dillinger was shot by FBI agents in 1934.

The record store was at the forefront of the punk/dance/industrial music that was part of the Chicago scene in the 1980s and 1990s. Soon after the store opened, it became a popular record label that helped release records for noteworthy artists such as KMFDM, Ministry, My Life with the Thrill Kill Cult and Front 242.

“My wife was a big supporter of [Wax Trax! Records],” said Dr. Green. “She is from Bourbannais and she used to come into Chicago when she was younger to [shop at the store.]

“Wax Trax! has a pretty strong history in the underground music world. They used to sell all kinds of interesting music there.”

But before the exciting times of Wax Trax! Records, the building had a more somber vibe.

“Tim Glascott, a friend of mine and a patient, owns Glascott Saloon down the street and he informed me that the location was a funeral home initially,” said Dr. Greene. “And I always thought that was kind of interesting. I never really believed too much in supernatural things.”

But his feelings changed after weird things started happening around the office. A new receptionist noticed a boy wearing old clothes watching TV in a room when there were no children, and a security alarm was tripped one night though no one was there. TVs have turned on by themselves, music has been heard blasting after the staff made sure to turn off the stereo, and one person felt someone following them down the hall when no one was there.

“My staff is absolutely convinced that the office is haunted,” said Dr. Greene.

Despite the creepy happenings that occasionally occur, Dr. Greene loves his unique office. The musicians that once walked the building made famous by Wax Trax! and the eeriness of having been a funeral home for many years make the building “kind of a fun place.” “All the history is so fascinating to me,” said Dr. Greene.
Categories :
Tags : 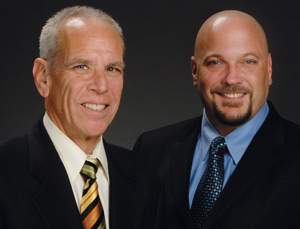