David Behm follows his own beat

In third grade, David Behm’s teacher asked if anyone wanted to play the bongo to the song “Yellow Bird.” Dr. Behm raised his hand to volunteer and the rest can be considered history. Drumming, he feels, just comes naturally.

“I played in my head for many years, but never actually bought a drum kit or sticks until after dental school,” said Dr. Behm, a 1981 graduate of the Loyola University School of Dentistry and a self-taught drummer who doesn’t read music when he plays.

Jam SessionToday, the president of the Chicago Dental Society’s North Side Branch and Chicago-based general dentist spends his free time playing in open jams in the city and the suburbs. Open jams often take place at a bar where there is a house band; the house band may play the first set and then the patrons of the bar, who signed up to participate earlier in the night, go on stage and play a few songs unrehearsed.

“For me, it’s fun and challenging,” said Dr. Behm. “It’s nice to not have to lug anything around. I just bring my sticks with me.”

Because of Dr. Behm’s love of jam sessions, he set out to stage one for his branch’s Installation Night last May. They placed a full-page ad in the CDS Review and asked guests to indicate if they’d like to jam when they RSVPed.

Turns out, three members were interested in jamming with him. Alice Boghosian played the flute, and Thomas Sullivan played the guitar and sang. Spencer Bloom offered to play the drums, but was hesitant at first. Dr. Behm urged him to come play and Dr. Bloom ended up playing for over an hour on stage.

Dr. Behm imagined the night being like a mini Midwinter Meeting Dinner Dance, complete with music, dinner and dancing. Not only was there the jam session but A.R.M.E.D, a blues/rock band, played some of the music for the night with Dr. Behm on the drums.

“We practiced beforehand. I had asked a buddy of mine from high school who drums to help me out so I wouldn’t have to be behind the drums all night,” said Dr. Behm. “The band that he plays with also brought their singer and bass player.”

To top off Dr. Behm’s night, he was able to play a Pink Floyd set with his son, Harry, on bass and Dr. Sullivan on guitar.

But what really made the night special was that Dr. Behm’s father, retired orthodontist Ralph Behm, installed all of the new North Side Branch officers.
Categories :
Tags : 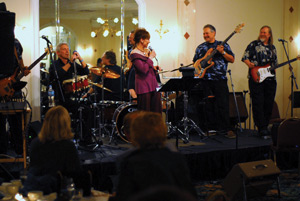