Barry Janov’s license plates give a hint about his outside interest and passion. The retired dentist’s vanity plates are simple and direct: RADIO 4.

He said the expression is a nod to a question his wife, Jeanne Duggan, asks when he comes home toting yet another antique radio.

“What is that radio for?” she inevitably queries, he said.

It’s a pertinent question considering the co-founder of the Antique Radio Club of Illinois has owned hundreds of various makes and models of radios and microphones through the years.

“At one time I had a basement full (of the audio apparatuses) but when we moved to this house my wife and I agreed that I would limit my collection to one room,” he said.

Dr. Janov and his wife, who is also a dentist, were practice partners in Des Plaines before he retired a few years ago.

He didn’t start collecting radios in earnest until the late 1970s, but he had an early interest in building crystal radios when he was young and also collecting old dental equipment, because his father, Michael Janov, was a dentist.

Dr. Janov donated much of that collection to the University of Illinois at Chicago College of Dentistry, where he earned his dental degree in 1959.

He said he has been attending the Chicago Dental Society’s Midwinter Meeting since he was a youngster, tagging along with his father.

“It’s certainly one of the best (dental) meetings in the country,” Dr. Janov said of the Midwinter Meeting. He said he plans to continue to attend the gathering to keep his interest in dentistry sharp.

His interest in collecting antique radios and microphones was piqued after attending an Antique Radio Club of America event in Elgin in 1979. Dr. Janov and a friend decided to start a local club.

The first meeting was on Feb. 16, 1980, a cold day that had the organizers questioning if anyone would show up.

“We talked to everyone we knew and told them about it and we didn’t think anyone would show up, but 40 people did,” Dr. Janov said.

“People showed up with radios to buy and trade and we got together some bylaws,” he explained. The next year the group started an annual event called Radiofest, which is now a three-day event that includes an auction and swap meet.

Interestingly, three of the 40 collectors who attended that first meeting were fellow dentists including Ralph Muchow, who had one of the largest radio collections in the country, and Larry Wright.

“So anyone who says that they were a chartered member has to show the money clip (to prove it),” he said.

The club now has about 400 members, down a bit from its heyday. Dr. Janov explained that the Internet has made it much easier for collectors to find what they are looking for.

But he likes the thrill of the hunt.

“I still pound the pavement (looking for equipment), but not as much as before. Now I can go online and check the estate sales and look at the pictures to get an idea of what is going to be there,” he said. “I’ll go to flea markets and if I find one or two things in a year then I’m happy.”

Dr. Janov shares his enthusiasm for old-time radio and his knowledge of the subject by giving talks at senior centers and libraries.

He points out that commercial radio broadcasts didn’t start until 1920 and it wasn’t until 1926 that the first plug-in electric radios came on the scene.

Radio had the ability to transport listeners from their living rooms to places like the ballroom of the old Don Roth’s Blackhawk Restaurant in Chicago’s Loop. WGN radio would broadcast the Big Band sounds of famed entertainers such as Bing Crosby, Kay Keyser and a young up-and-comer, Perry Como.

In fact, one of the stars of Dr. Janov’s microphone collection is a stand-up model used by WGN Radio and donated to the Blackhawk by broadcaster Jack Brickhouse. It was on display at the Blackhawk restaurant’s Loop location and later in Wheeling. Mr. Roth died in 2003 and the Wheeling location closed in 2009.

Many who went to the restaurant craved its famous creamed spinach or spinning salads bowls.

But Dr. Janov had other temptations.

“I would go into the (Wheeling location) and see that microphone and just drool.”

And now, he owns that microphone and it is part of his collection. 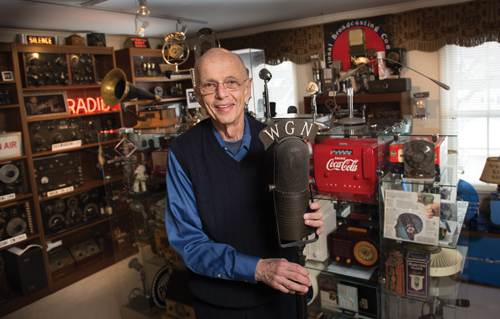