If someone were to announce they were heading to a dentist appointment and planning to pick up a dozen eggs, one could assume they would be making two stops. That is, unless they are visiting Andrew Moormann.

That’s because Dr. Moormann stocks a small cooler in his Burr Ridge office filled with fresh eggs from the poultry he keeps on the hobby farm he runs out of his Wilmington homestead. He offers them for sale by the dozen to patients.

In Dr. Moormann’s experience, the question of what came first, the chicken or the egg, can be answered easily . . . the chick.

His path to poultry adventures started with a trip to a rural hardware store selling chicks.

“I had a chicken coop already there (at the farm), and I used it to store lawn furniture for a couple of years,” he explained. “One spring I went to the hardware store, and they were selling chicks.”

He said he figured he had the chicken coop so he might as well put it to use.

“You give eggs away to as many neighbors and friends that you have, but you still have more eggs,” he joked.

So he started bringing in cartons of the eggs into the office and storing them in his waiting room, offering them for sale to patients. He charges $3 a dozen, a relative bargain if you have been to a farm stand lately.

“The “farm fresh” eggs sell “pretty well,” he observed. He said his chickens produce about 25 dozen eggs a week, about half of which he sells through his dental office.

He has a number of patients who are regular customers who might buy a dozen after coming in for an appointment. But some make a special trip when eggs are plentiful and buy about 10 dozen eggs at a time.

“They probably buy them and then redistribute them amongst their relatives,” he said. Dr. Moormann has a variety of chicken breeds on the farm; some are slightly larger-bodied to better withstand the cold winter weather. Some lay brown eggs, some lay white-colored eggs, and some lay what are called “Easter Eggs,” which are powder blue, with brown and white, so they look as though they are colored.

He said the most common breed at his farm is a Rhode Island Red, which lays a brown egg.

He has about 75 chickens, a small number of which are roosters. He refreshes his flock by having a select few “broody hens” sit on a clutch of eggs until they hatch. With the roosters present, he assumes that virtually all of the eggs are fertilized.

After acquiring the chickens, he branched out to quail.

“Most of the quail eggs for sale in Chicago come from Canada,” Dr. Moormann explained. “But quail are a fun little bird. You have to cage them but you can literally have a bank of refrigerator-sized cages and that will supply three families with fresh eggs year ‘round. One quail will put out about four to five eggs a week, compared with chickens, which lay about every other day or about three to four eggs a week.”

Dr. Moormann said at one point he had about 300 quail but has since cut down that number considerably.

And just as the number of chickens on the farm grew, so did the variety of animals living on the 7-acre “hobby farm.”

The farm is also home to guinea hens, six turkeys, about a dozen geese and ducks, a white peacock, a dozen dwarf goats, an emu, a miniature horse and a not-so-miniature ostrich.

Dr. Moormann said the ostrich was hatched from a fertilized egg he purchased. For a time, he kept the flightless bird in his office in a little dog crate when it was young. He used to let it wander around the waiting room, and he would also take it for walks, much to the delight of his younger patients.

That scenario would not be advisable now, he said, considering the ostrich is almost 7 feet tall and has a bit of an attitude.

With more animals, Dr. Moormann said he has had to add structures on the property since moving there in 2003.

Besides the main house there is a pole barn, two animal barns and a coop and outside run for the birds that are screened and netted. He also has a garden area.

Having a safe place for the chickens to spend the night is important, he explained, since living in a rural area means there are plenty of predators around to cause havoc to his menagerie.

The chickens need to be safely locked away every night because they can’t really protect themselves from feral cats, skunks, coyotes, foxes, raccoons, opossums, hawks, owls or even turkey vultures that see the birds as a potential meal, Dr. Moormann said.

“If you leave chickens out, you will have two or three fewer chickens every night,” he warned.

He also has a built-in security system the natural way: his guinea hens act as great “watch dogs,” squawking like crazy if they see anything roaming around that shouldn’t be there. Taking care of the animals, including feeding, watering, cleaning and collecting the eggs, takes him a good 10 hours a week, Dr. Moormann said. He goes through about 20 gallons of water a day. In the summer he can use a hose, but in the winter it means he carries out 5-gallon buckets of water to and from the structures.

He feeds the chickens commercial grain so they have the proper minerals, vitamins and nutrition. He picks up the grain from a feed store, buying about 50 to 60 50-pound bags at a time. “The feed store will have four teen-aged guys load up my van in about 5 minutes, and tell them, ‘You realize that everything you’re throwing in here I have to take out by myself!’ It keeps me from having to go to the gym,” Dr. Moormann quipped.

He also gives chickens watermelon, lettuce or any vegetable scraps or grocery store scraps as a treat. The turkeys and ostrich get any broken eggs he finds.

The “furry animals” are fed a diet of alfalfa, hay or grass. The alfalfa comes from an 80-acre farm he owns in Southern Illinois.

At the end of the day, Dr. Moormann, who earned his DDS degree from the University of Illinois at Chicago College of Dentistry in 1981, said he’s glad he decided to become a dentist instead of a farmer.

“These guys (farmers) work with no pension, no holiday pay, no time-and-a-half, with literally no retirement (plan). I do it as a hobby, which gives me more respect for the people who have to try and do it as a living, “Dr. Moormann said. 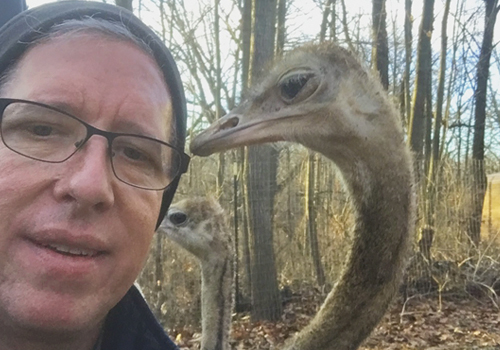