Alvaro Figueroa has a mission

Alvaro Figueroa is passionate about his profession of dentistry and bringing its benefits to others.

And that passion can be seen in his efforts to help fellow health care professionals give quality dental care to underserved children of the world, especially those dealing with difficult dental issues such as cleft lip, palate and other craniofacial problems.

“The NIH has always been in the forefront of research on craniofacial biology,” Dr. Figueroa said. “My intention was to do something clinical and not just deal with research.”

His work during the fellowship spurred his desire to help others.

“It became evident to me that becoming an orthodontist would be a crucial move for me to help children born with craniofacial issues,” he said.

He then earned his Orthodontics Specialty Certificate at the University of Rochester School of Medicine and Dentistry, Eastman Institute for Oral Health. In 1980, he relocated to Chicago and received a Pediatric Dentistry Specialty Certificate at the University of Illinois at Chicago College of Dentistry. He also earned a Masters of Science degree in Oral Health and completed a fellowship at the Center for Craniofacial Anomalies at UIC.

“My intention was to complete my training and go back to Guatemala,” Dr. Figueroa said.

But instead, he stayed in Chicago and completed training in pediatric dentistry and went to work for the UIC dental school’s department of orthodontics, a position that lasted for almost 20 years.

He then moved to Rush University Medical School, but also has a private practice in Naperville.

“Most of my work is clinical,” Dr. Figueroa explained, “with a small component of teaching.”

As part of that experience he helped organize several groups of surgeons to go back to Guatemala to do cleft lip improvement surgeries.

And through that work he partnered with John Polley, a surgeon who recently moved from Rush to Michigan, and helped discover a technique used in treating craniofacial deformities.

“We developed a special system moving bones in the face and jaw that is now used worldwide,” he said.

His travels to help spread knowledge of the technique has brought him to Uruguay, Brazil, Puerto Rico, Columbia, Japan, Taiwan, India and other countries. He is also in contact with colleagues in European countries.

As part of his philanthropy work, Dr. Figueroa has been on the medical advisory board for Smile Train, a New York-based international charity that works to help train health care professionals in underdeveloped areas to deal with cleft lip and plate problems.

Dr. Figueroa stressed that Smile Train does not do traditional missions of mercy where a medical team may come into a needy area, perform dental care and then leave.

Instead, he said, the idea is to train local doctors on how to best perform cleft repairs.

That way there is no interruption of care, he explained. Children do not need to wait for outside doctors to do the work.

“It becomes sustainable and self-sufficient,” he said of the cleft operations.

He said after they train local doctors the care can become very sophisticated in even remote villages, some offering better care than what can be seen here in the United States.

Dr. Figueroa said he likes to take at least one mission trip a year.

His most recent Smile Train trip was to Saint Cristobol, in the Mexican state of Chiapas in February of 2014.

His son, Aaron, who is also a dentist and is pursuing specialized training in oral and maxillofacial surgery at the University of Iowa, accompanied him on the trip.

His other son, Alex, is also an orthodontist in Naperville, and is active in the West Suburban Branch of the Chicago Dental Society.

“We went to a remote area where hospital surgeons operated on 40 to 50 patients,” he said. His group included three surgeons, and two residents who were learning the procedure.

“I find it very rewarding not to just go and do stuff and leave, but to go and leave knowing someone is there who is going to help their own people,” he said. 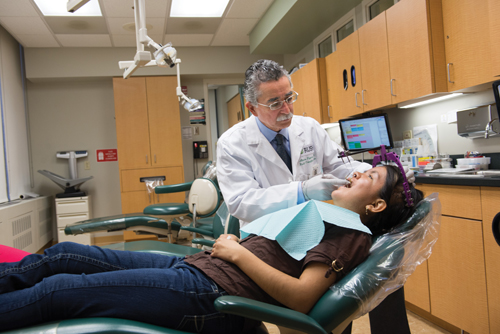