During a 500-mile trek in two foreign countries, through unfamiliar and sometimes precarious terrain, there will be times when a person feels overwhelmed, challenged and mystified. Such was the experience of Robert Manasse as he hiked for 25 days this spring along the Camino Frances, one of the many routes of the Camino de Santiago, a Catholic pilgrimage also known in English as the Way of St. James.
However, for Dr. Manasse, it seemed every time he found himself needing an answer, needing support, needing directions or needing a place to stay, someone appeared and, without prompting, helped him solve his dilemma.
The most popular French route starts in the small town of St. Jean Pied de Port, nestled in the Pyrenees Mountains near the border with Spain. After winding its way through northwest Spain, it ends some 500 miles away at the Cathedral of Santiago de Compostela in Galacia, the shrine of the Apostle James.
Some pilgrims, including Dr. Manasse, extend the walk adding about 56 miles to trek to Cape Finisterra, translated as the “end of the Earth.” At least, it was the end of the Earth as far as people in the ancient world knew, which all changed with Christopher Columbus, Dr. Manasse added.
The idea to do the pilgrimage started several years ago as Dr. Manasse was standing in front of the cathedral in Chartres, France while his wife was attending a meeting. He saw a tile with the scallop symbol that is associated with the pilgrimage.
He did a rubbing of the tile to give to a friend who had once done the walk.
In researching the walk and hearing people talk about it, he decided some day he would take up the challenge. Last year he resolved that the time had come, and he would spend April and May of 2017 doing the pilgrimage and complete it on or near his 70th birthday.
Dr. Manasse said he was not too concerned about the physical aspects of the trip.
“I’m a marathon runner and triathlete, so I‘ve been running for decades,” he said. “But I’ve never been a hiker. I walk and

being a triathlete I swim and ride a bike, but this was my first experience in ­­­­hiking.”
Being a runner, he didn’t have hiking footwear; so he purchased a pair of Eddie Bauer boots. He broke them in by strapping on a backpack and walking in place of his customary daily 3 or 4-mile run.
But as the date to leave approached, he decided to ditch the boots and wear running shoes instead.
“I asked myself, ‘why wear these boots when my running shoes are so nice,” he recalled. “I was just going to be comfortable and wing it, what happens, happens.”
The running shoes were sufficient for the most part, Dr. Manasse said.
He did encounter inclement weather one day when an early spring storm made hiking down a steep hill treacherous. He accepted a ride in a van to level ground from the owner of the small hostel he had stayed in the night before.
Facing such challenges was one of the reasons he decided to do the Camino.
“I really did it for four reasons,” Dr. Manasse explained. “First, I wanted the adventure; I like to test the limits. Secondly, I wanted the challenge, ‘could I do this thing?’” Third, he thought it would be special to turn 70 years old while doing the Camino.
And lastly, he did it contemplating the spirituality of the pilgrimage.
“It is supposed to be a spiritual journey,” he said. “And so I decided whatever happens on that journey for me I’ll welcome it and that was the neat thing.”
Pilgrims are given a special passport of sorts that are stamped on the way so that they can get a certificate at the end to confirm they completed the ordeal.
“It was real interesting on how you are respected and how everyone was so friendly,” Dr. Manasse said.
While he knew the route he would take, he did not make plans for things such as how far he would walk on any given day or where he would stay at night.
“I had no planning, when I said I was going to go there and do this Camino, I did not plan,” Dr. Manasse said.
Every morning he would start off at about 7:30 a.m. and without the benefit of breakfast, walk about 5 to 7 miles before coming to a town and stopping for a cup of coffee, an egg sandwich and a bit of a rest.
He would then walk until late afternoon when he would stop for an early dinner.
After dinner, he let providence take over, and he was never disappointed.
“It was really an experience, every day walking and looking for telltale signs of where The Way is and going by faith,” Dr. Manasse said. “That’s what it is all about.”
His goal was to average about 20 miles a day.
“I figured if I can run 26.2 miles, I can walk at least 20,” he said.
Finding help when he needed it was never a problem; people seemed to appear when he needed support the most.
“It was almost as though out of nowhere there was an angel,” he exclaimed. “All the time, whenever I said ‘where should I go now?’…in the most opportune times, they were there.”

Dr. Manasse recalled his first night in a hostel, an inexpensive lodging similar to a dormitory.
“I had no clue how it all worked,” he said. “There was this person next to me who said, ‘oh yeah, here’s what you need to do.’ A person would just appear that had done this a number of times and say ‘here’s how you do this.’ I never had to ask the question, they just knew.”
Even though he is not Catholic, he attended evening Mass held for the pilgrims in the small towns along the way.
He found his interaction with other pilgrims and the Spanish and French people was the most memorable part of the journey.
“The Camino is you going by faith that you will show up at the right place, at the right time and you will have a bed, you will have a shower and you will have a meal,” he said.
And that experience was uplifting for Dr. Manasse, who retired as a clinical professor in the Department of Orthodontics at the University of Illinois at Chicago College of Dentistry at the end of 2015.
The trip moved him in many ways.
“As you go through it and take in the setting, you become part of the Camino. It validated my own feelings of life and how my faith leads me,” he said.
And, he added, it provided proof that one has to have faith in the journey that is life and not to underestimate the brotherhood of man.
“The experience I didn’t expect was how all the people along the way were great,” he said. “There are a lot of great people in the world.”
Mr. DeRosier is the CDS staff writer. 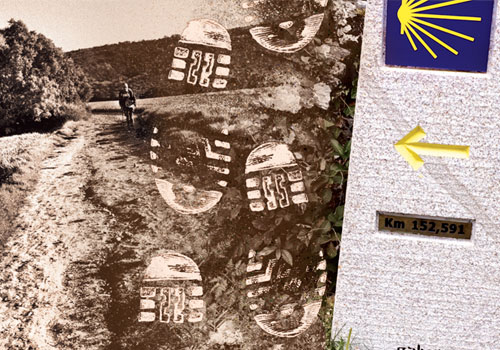