Growing up on a farm in Tennessee, Larry Williams became comfortable doing odd jobs and working with his hands, using tools and his imagination to build things. The retired Navy captain now uses those skills to breathe new life into discarded furniture such as a chest of drawers, an end table or a cabinet, to transform them into cat litter box enclosures, dog-feeding stations, or dog beds that are sold to help out charitable organizations geared toward helping animals.

His effort mostly focuses on the litter box enclosures, which give feline friends a place to do their business out of sight. The enclosures are made from the old furniture and disguise their true use. The cat’s litter box sits hidden inside the furniture, accessible by the cat through an opening cut into the unit’s side.

Dr. Williams does the carpentry and mechanical work to fix up the furniture. His significant other, Allison Getz, does the painting and decorating. Her son, Will, helps the couple complete the projects. The end result is an interesting and distinctive-looking piece of furniture that can bring in hundreds of dollars for charity. This year alone they have helped raise several thousand dollars for Chicago-area charitable groups.

The inspiration for the litter boxes came when Dr. Williams, an assistant professor at Midwestern University College of Dental Medicine – Illinois since July of 2012, saw a plastic cat litter box enclosure made to look like furniture being advertised in an in-flight airline magazine.<

“I thought, I can make that,” Dr. Williams said. So soon afterward he made one out of an old steamer trunk. “Our cat loved it,” he said.

“We found out that a local rescue shelter for cats and dogs wanted to raise money,” he explained. He made an enclosure that was put up for silent auction and raised much more money than he had expected.

Word of Dr. Williams’ handiwork got around and requests from other organizations for similar furniture to use to generate donations started to arrive.

He explained that each piece has a unique design determined by the furniture’s components. For instance, with a three-drawer chest of drawers, he removes the second from the bottom drawer taking the facing and creating a false front so that both open with only the bottom drawer still in place. Dr. Williams said he then turns the unused drawer into a dog bed by installing a cushion.
Dr. Williams said he obtains furniture for conversion from various sources.

“We get most from garage and estate sales,” Dr. Williams said of his projects. He said some of the furniture comes from friends who know about the work. He prefers older furniture.

“We used to not be very picky but we learned the hard way,” he said of the pieces the couple would accept. Newer furniture can be made of cheap particleboard that doesn’t lend itself to refurbishing, he explained. So now he won’t accept anything that is too shoddy.

The best finds are salvaged furniture left on the curb waiting to become part of a landfill, he said.

Dr. Williams recounted that the couple was walking their dogs, three rescue animals, when someone let them know about a 7-foot armoire sitting on the parkway ready to be hauled away as garbage. He said he got the owner’s permission to take it, but it would not fit into their car. He then spent some time taking the solid piece of top-grade pine furniture apart piece by piece.

“Recycling furniture is good for the environment,” he said.

That attitude is an outgrowth of his background. Being raised in The Volunteer State meant he has always been active in community activities such as Boy Scouting, earning his Eagle Scout badge as a youth and serving as a scoutmaster, even though he did not have any children in the troop.

“When I was growing up, we always helped others,” Dr. Williams said.

His projects are spread out in various areas of his home. He said there are some sitting in his garage in various stages of design. He installed a large awning on his garage that allows painting to be done outside but shielded from the sun.

Another 20 or so pieces of furniture are finished and sitting in his home waiting to be sold.

He said he is capable of completing about four or five conversions per day during the weekend.

Some of his projects can be found at his website, www.nopoo2c.com.

“As a dentist you have to be involved in the community,” he said of his efforts. 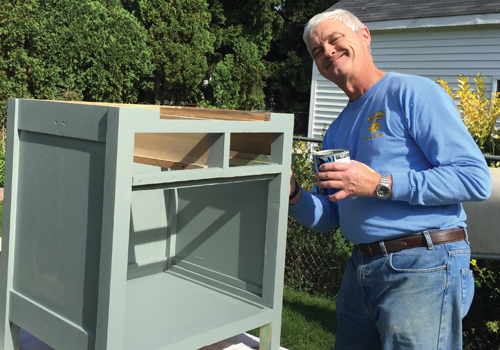