Giving back to the homeland

A few years ago, CDS member Larry Abdullah went home to a place he had never seen. And when he got there, he was welcomed as a brother by inhabitants of the western African country of Burkina Faso.
“It was the first time I had ever been to Africa,” Dr. Abdullah said of his trip in 2013. “I had my DNA tested and this country was in the list. My people were from the Congo and went across to West Africa.”
Dr. Abdullah’s trip to Africa resulted in his participation in a program to reunite people of African descent with their ancestral homeland.
When he arrived in a small village in Burkina Faso, tribal members presented him, and other visitors, with gifts such as an animal skin bag, a water container made from a gourd and a hunting bow. They also gave him a small plot of land and bestowed him with a special name, Somé Dar, in commemoration of his acceptance into the community.
In return, Dr. Abdullah returned this year to give the gift of  dentistry.
“Since I’m a dentist, I decided to arrange to have some kind of program to give a dental present to the residents,” Dr. Abdullah said.
He said dental care is not readily accessible for residents of the small villages in the southwest part of Burkina Faso. He said normally, residents of the area have to take a long bus ride to the capital city of Ouagadougou for any dental health care.
“I thought maybe this could serve as a model for people to give back to Africa,” Dr. Abdullah said.
The aim of the reuniting program is to have people of African descent reconnect with the continent to bring back skills and experience that is otherwise lacking.
He said it is difficult to trace lineage because the process of slavery disconnects African Americans from their history.
Dr. Abdullah said he can trace this ancestry back to his great-great-great-grandparents, but beyond that “it starts to get a little cloudy.”
“I just wanted to get some idea where I was connected to in Africa,” he explained, which led him to take a DNA test to help give him a clear picture of his African roots.
He also found that he has some ancestors who are from southern Europe. But he said he is predominantly African by both parents.
“I was really shocked” to find out that the two were related, Dr. Abdullah said.
Dr. Abdullah, who has a general dentistry practice on the southwest side of Chicago, said in order to perform the dental care he hires people in the village and trains them to sterilize equipment and to work as translators.
The chief of the Dagara tribe in the village of Boulsa spreads the word that Dr. Abdullah will be available.
Because of the sparse resources the extent of care is limited to adults and included dental hygiene treatments and extractions.
For about two weeks Dr. Abdullah and the staff of villagers he trained to help him worked from 9 a.m. to about 3 p.m. seeing an average of eight patients a day. The goal was to perform 100 extractions.
He said some patients needed fillings, but they were not set up to accommodate that type of care.
He said they set up a triage system with those in the most painful situations being taken care of first.
Dr. Abdullah, who earned his dental degree in 1972 from the Meharry Medical College School of Dentistry in Nashville, TN, said he would like to establish a regularly scheduled visit and expand services.
“My plan is to go back every year and encourage other professionals, not just dentists, who would find giving back as rewarding as I do,” he said.
And that goal fits the tribal name he was given, Somé Dar. His tribal name describes the relationship of a prodigal son returning home. 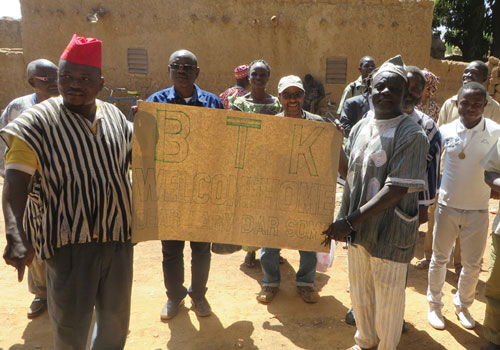