CDS members reach out to underserved in Panama

Growing up the son of a dentist in the middle class suburbs of Chicago, Brian Burseth’s life was not one of privilege per se but certainly one that was comfortable and afforded all of the advantages of living in an industrialized and developed nation. So when Dr. Burseth, who now practices with his dad, Chris, in their Crystal Lake office, went on some church volunteer trips to underdeveloped areas in 2005 it was revealing.

“That trip opened our eyes on how impoverished people live in some areas,” Dr. Burseth said.

That experience eventually led to his father starting the philanthropic group Mission Save a Smile in 2007 that focuses on bringing dental health care to a group of Panamanian indigenous people who lack access to health care, not to mention basic living amenities like running water.

Dr. Burseth’s father was taking a continuing education course in Panama that included tours and cultural events. During one of the tours, a Panamanian native chief mentioned, not knowing he was speaking to a dentist, that one of the overarching needs for the inhabitants was dental care.

“We were looking for a location to start a project,” Dr. Chris Burseth said, and the Panama area fit the bill.

The doctors bring dental care to the densely populated island of Achutupu, located in the Caribbean Sea off Panama’s Guna Yala province. The island is home to about 2,000 indigenous Guna Indians.

“They have no other dental care outside of when we come there,” the elder Dr. Burseth said.

“There is no real economy on the island,” Dr. Brian Burseth said. “There is no running water; they are a hunter/gatherer society that does some barter trading, with coconuts being the biggest export,” he explained. The women wear brightly colored molas, a cloth made by reverse applique that is worn as the front and back panels of a blouse. The women also sell the garment pieces to tourists, he added.

The doctors’ first dental mission trip was in 2007; with the help of a tour guide, the doctors brought some basic dental equipment for screenings and fluoride treatments.

“We made our own portable dental equipment, like delivery units, hand pieces and suction devises,” Dr. Burseth said.

He added that they also brought their own compressors and generators.

“We were running everything using scuba tanks but that is not very efficient especially with more sophisticated dentistry equipment,” he said. They now store the equipment in waterproof containers for use on subsequent visits.

Dr. Burseth explained that the indigenous population has their own governing system with regions being governed by an elected leader, called a “saila.” The saila must give the go-ahead for the dental team to perform procedures on children.

“Before we could do any dental work we had to meet with the saila and they said no one without a license would touch any of their children,” he said.

Staging a mission event means hours of preparation and considerable effort traveling to the island.

The crew loads up containers with supplies and flies out of O’Hare International Airport to Panama City. From there they take a 12-person plane to an airstrip on the mainland near the island and then have to take a boat to the island.

Each mission effort takes about 10 days, Dr. Burseth said. They set aside about two days for setting up the equipment, five days of work and about a half-day for clean up.

They stay on a nearby island that has small rustic cabanas. And one of the perks of the mission is enjoying fresh seafood.

“We are fed very well when we are there,” he said.

The trips to Achutupu are planned for March when the University of Minnesota School of Dentistry has spring break. Dr. Burseth, a Minnesota graduate, said he arranges to have a handful of students accompany the mission.

In all between 15 and 20 people go on the mission with about five dentists and oral surgeons, and five students and other volunteers. Volunteers pay their own travel costs, although Mission Save a Smile does some fundraising and dental supply companies help out with donations of materials.

“It (arranging for funding) really is like a second full-time job for my parents,” Dr. Burseth said.

The group makes another trip this summer, but this time it is to the mainland deep into the Panamanian rainforest jungle treating Embera indigenous people.

“When we go there, we have to take dugout canoes through the jungle for about an hour to get to the village,” Dr. Burseth explained.

Temperatures in the rainforest hover in the upper 80s year ‘round, he said and the humidity is constant since there is usually a downpour for a couple of hours every day.

The dental work is done under a thatched hut and the crew brings a few translators to help communicate with the Embera. They also bring distillers to sterilize water used in the dental work. The dental team draws water from the river with filtered hand pumps and uses a SteriPEN, commonly deployed by backpackers and campers, to purify drinking water.

There is no fluoride in the drinking water either on Achutupu or in the jungle nor is there much oral hygiene, so the crew takes in toothbrushes and toothpaste for the kids. They also treat the children with a fluoride varnish as part of the care.

“The people are very friendly and appreciative of our work,” Dr. Burseth said. “At first they were apprehensive because they don’t get a lot of outsiders coming to the island.”

Although the children only speak the Achutupu language, most of the adults also speak Spanish. Dr. Burseth said his mother, Patty, speaks Spanish and is able to communicate with the adults, breaking the ice and establishing a rapport with the island’s inhabitants.

Chris Burseth said he is glad his son has accomplished much and loves the continuing connection.

“It’s great having him work beside me here in the office as well as doing our volunteer work,” the proud father said. 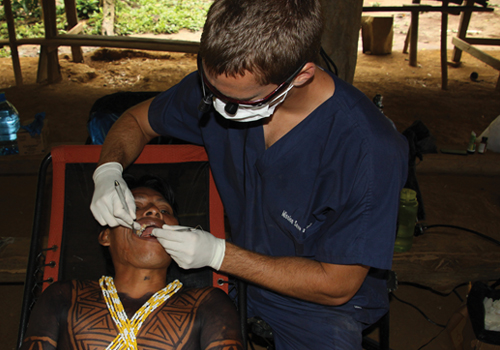