Irene Renieris and her family were looking for a unique space that they could call home. The general practice dentist and her husband, Eric Arvin, an interior designer, started searching for that special place they could call their own. They hit pay dirt a few years ago after a family member drove by an empty firehouse in the Lincoln Square neighborhood of Chicago and alerted Dr. Renieris and her family about its availability.

It turned out that the City of Chicago was starting to sell off former firehouses around the city, and such a structure was just the kind of situation the couple was looking for.

There were a number of old fire stations available in various neighborhoods, some in better shape and in better neighborhoods than others, Dr. Renieris said.

When she and her family found the two-story brick building with an arched double door opening and a massive flagpole jutting out from the front, they knew that “this was the one in the area that made the most sense for our family,” she said. Not to mention, it was about a block walk to her dental office in neighboring Ravenswood.

“We entered the bidding process,” Dr. Renieris said, at the time not realizing all of the hoops they would have to jump through and all of the complications they would encounter to bring the building up to code and make it the home they really wanted.

The firehouse was first built in the 1880s as a wooden frame structure. It was later destroyed – reportedly by a fire – but rebuilt using masonry in 1936. The rebuild was part of a series of federal Works Progress Administration construction projects involving public buildings. In all, 11 Chicago firehouses were built, all using the same basic blueprint.

The Chicago Fire Department decommissioned the building in 1972, after which it was used as the headquarters of the Northside Fire Prevention Bureau, according to a website that focuses on the history of Chicago firehouses.

The CTA’s Brown Line “L” tracks run along the rear of the building, close enough that two parking spaces are allowed for the structure under the tracks.

“We were very conscious of that (the tracks being so close) but being a solid brick building it’s not too bad,” she said of the noise. “We don’t mind it, especially since we have triple-pane windows.”

Dealing with a structure that was not made to be a residence has had its challenges, she admitted.

“As they say, rehabbing is more difficult than new construction, but rehabbing a firehouse. . . that is true even more so,” Dr. Renieris said. 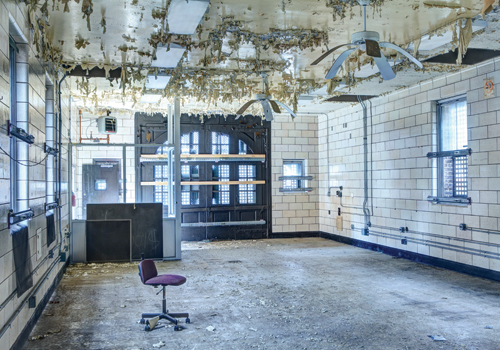 The upstairs living quarters is where the home’s four bedrooms are located. The family wanted to keep the look of a firehouse to some extent, she said, so they didn’t change the layout of the kids’ rooms, including a bathroom that has two toilet stalls and two sinks.

What used to be the truck bay became the living room, which means it has a wide open feel to it.

“The kids (sons Apollo, 4, and Atlas, 2) can ride their tricycles (on the home’s polished concrete floor) and we don’t care, she said. “Other kids come here and go home and ask their parents, ‘why can’t we have a cool house like that!’”

The couple did, however, close off the three openings where fire poles used to be located, leaving one available for installation down the road. They also left the two-story space and all the hardware that was used to hang fire hoses to dry out after firefighters returned from a fire.

Construction also included an expansion that added a mudroom, which took even more of the lot’s footprint. The idea was to use it as a garage but the configuration did not work out.

In addition the couple took out part of the west brick wall and put in a 19-foot sliding glass door. With more than 4,300 square feet of living space, the home offers plenty of room to accommodate guests.

“It’s an amazing space for entertaining,” she said. “I love hosting dinner parties and brunches. People know our home is where they can gather and catch up.”

To help in that endeavor, she uses what she calls her own “fire engine,” a large, red-colored Viking professional-style stove that is the focal point of the kitchen.

Although the rehab took longer than expected and there were some setbacks, the Detroit native who came to Chicago after graduating from the University of Indiana School of Dentistry, said the effort has “all been positive.”

“We love the hustle and bustle of the city,” said Dr. Renieris. “[Lincoln Square] is a great neighborhood.”

When asked if she thinks the novelty of living in a firehouse would ever wear off, Dr. Renieris replied, “I don’t think that would ever happen. This, is a forever home.” 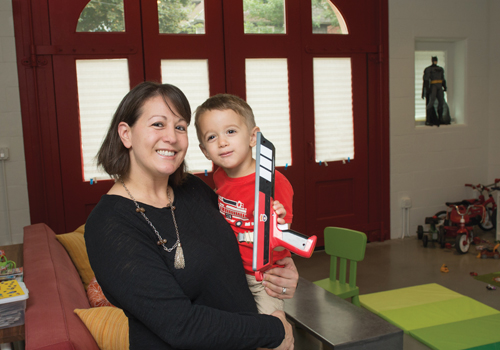