When Dan Fidanze was a teenager growing up in Cicero, he gave some thought to becoming a professional musician.

And why not? He had taken piano lessons since he was 10, and continued to do so while attending Fenwick High School, a Jesuit and, at the time, an all-boys school in Oak Park.

Dr. Fidanze liked the music theory classes he took in school and messed around on the guitar enough to become pretty good. He was good enough to play in bands comprised of fellow students at the local music studio where he studied.

“They would take the kids who were taking lessons and throw them together to make a band out of them,” he explained.

“I did think about it (starting a career in music) while I was in high school,” he said. He gave serious thought about making music his profession and majoring in music at Northwestern University.

“But then I decided to make a pragmatic decision,” he said. “I thought, if making music was my profession, then what would my job be – giving lessons to kids who don’t want to take them? Playing wedding band music that I didn’t want to be playing? And not making very much money?”

Instead, he decided to go with his original inclination and pursue a career in the health field. And that ultimately led to him becoming a general practice dentist.

In his freshman year of college at Loyola University in Chicago he majored in biology major with an eye to getting a pre-dental education.

But he learned while in dental school at the University of Illinois at Chicago College of Dentistry that his musical skills and appreciation of music would be a plus.

“I remember one of the deans at the school – he pronounced that he was the dean of happiness – asking if any of the students had any outside interests. I told him that I played the piano and he said, ‘That will serve you so well because it helps with your motor skills,” he said.

And just like he had done in his younger days, the 58-year-old Naperville resident who practices dentistry in a Winfield office has continued to play in bands. He said playing music and the thought process behind music theory is “complementary to the skills needed for dentistry.”

And it is not just an infrequent hobby. He said he practices most days of the week on his own and tries to meet up with his band, The Snake Oil Barons, once a week, although that doesn’t always happen.

The Snake Oil Barons have been together for about three years and play covers of classic rock ‘n’ roll songs. And how did the group get its name?

“The Beatles and Rolling Stones names were already taken,” Dr. Fidanze joked. “Like most band names we just threw things against the wall to see what sticks.” He said one band member said trying to pass themselves off as professional musicians was like selling snake oil, and another said they were looking for fame and fortune like oil barons.
The name became a mash-up of those two phrases.

The band plays local fests and at any other locations that Dr. Fidanze can arrange.
He said they regularly play at a place called Gruben's Uptown Tap in Plainfield. They have also played at Westmont Fest, the Festival of the Vine in Geneva, and at the Morton Arboretum in Lisle.

“We usually play about once or twice a month,” he said. Since the band does not use a manager or booking agent, Dr. Fidanze said it falls to him to find gigs.

He said he sends out a cover letter to local festivals and venues that he knows about and tries to line up jobs. The band knows its schedule about two months in advance, he said. The band’s website www.snakeoilbarons.com has updates on when and where the band is playing.

“I love the food (of New Orleans) and I love the music. It is head and shoulders above anywhere else I’ve ever been.”

Because of his love of the New Orleans music scene, Dr. Fidanze sometimes sits in and plays piano for a zydeco band. He also used to be in a band that did mostly blues whose other two members were physicians; its name was The Code Blues.
Dr. Fidanze also writes songs and recently performed at a singer/songwriter showcase event at Silvie’s Lounge in Chicago.
He has a small recording studio in the basement of his home but admits that he hasn’t used it in a while.
“I’ve been writing songs since high school,” he said.  “I’ve recorded things but I haven’t packed a CD for resale.” 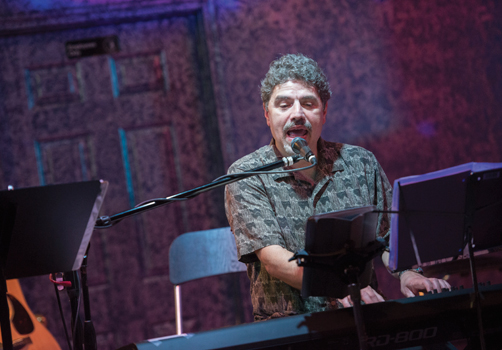