Harold Shavell has carved his niche

To be sure, dentistry requires mastery of technical skills. But for Harold Shavell, there is artistry and more to dentistry – the perfect shape, the proper alignment, the quest for aesthetics not only anteriorly, but in the posterior regions of the mouth as well.

“Morphology is an art form. We must always begin with the end in mind. Our job is to ensure the ordinary function of mastication does not become a self-destructive act.

“Too often,” he said, “dentists don’t use visualization in their work, letting slip the opportunity to be truly creative. People often speak of art and science as though they were two entirely different things, with no interconnection. Not so.”

Dr. Shavell may have retired 17 years ago from his north side Chicago practice, but he remains a figure in motion. He occasionally creates wax molds for jewelry and enjoys an apple sculpting hobby that was first profiled in the CDS Review in 1977. And he still reads voraciously, writes for journals, corresponds with friends around the world, exercises and jogs daily. At 80, he also remains thoughtful and passionate about his calling.

The pursuit of excellence – in all things – has always been a powerful driver for Dr. Shavell. Looking back at his dental school education, he found that explanation about details and technique only carried him so far; he craved understanding perception and visualization.

While language may be satisfactory to explain details and technique, Dr. Shavell said, it cannot adequately convey perception and visualization, something unfortunately lacking in dental school curricula.

Instead, he pushed himself, carving out a dental path that was self-propelled and finding inspiration in the work of some extraordinary doctors he encountered along the way.

“The inability to imagine explains why the eye does not see what the mind has not taught it to recognize. Imaging allows restorations to be carved with the mind, not the hand – the hand becomes merely a facilitating appendage. If you drive yourself, you can reach that level,” he said.

Disheartened to see some dentists who fell into the “drill, fill and bill” mode, Dr. Shavell wanted to set his bar high. “It’s the search, the constant pursuit of excellence that counts. Only the mediocre are at their best,” he said.

It was a lesson he tried to bring to students at his alma mater, the University of Illinois at Chicago College of Dentistry, the now-shuttered Loyola University School of Dentistry, Michael Reese and Illinois Masonic and Evanston hospitals, where he taught or lectured post-graduate dental residents. His lectures and writings about provisionalization, morphology, operative dentistry, crown and bridge, occlusion and perio-prosthetics have taken him around the world and garnered numerous awards and citations, including his inclusion in the Journal of Operative Dentistry’s list of those who made significant contributions to the field in the 20th Century. He even got a nod from former Chicago Mayor Richard M. Daley, who declared it “Dr. Harold Shavell Day” upon his Aug. 31, 1998 retirement.

It turns out that art was another powerful inspiration. Strolling through an art show with his wife back in the early 1960s, he saw someone carving an apple “and it was beautiful.” He set to learning by doing, carving apples over and over, gleaning something new each time. The Washington Pippins became his variety of choice. He would peel and pop the apple into the oven overnight at a low temperature, resulting in a malleable surface the next day just perfect for sculpting.

Apple in hand, Dr. Shavell would sit down for some free-form carving – extraordinarily intricate faces and designs – with a simple kitchen paring knife and a cuticle stick when needed. Faces and forms “just came to me,” he said.

From there he branched out, sculpting wax molds he would use to make jewelry for his wife and daughters, carving pipes, candles and even a few dental instruments.

“It just happened,” he recalled. “It would free my mind. Time steps respectfully aside when you do your art.” It served a greater purpose as well: with his concentration focused on his artwork, his right brain opened up to think through thorny cases from the office.

Today, a glass of wine and a sunset at the house in Northbrook he and his wife, Donna, have called home since 1968 wraps up many days. Looking back, Dr. Shavell believes it was his passion, honesty and authenticity with patients that served him best through his career. 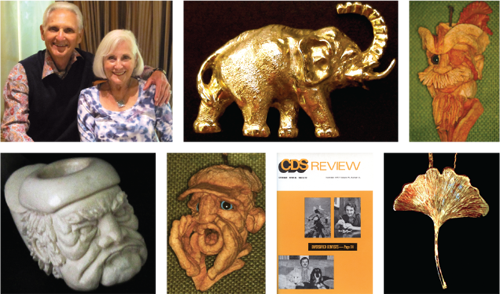