Bob Banks reflects on a life of service

Highlights abound in the nearly 90-year-span of Robert Banks Sr.’s life: growing up without plumbing or electricity on his family’s homestead in southern Illinois, meeting and marrying his wife, serving his country during World War II, raising his five children, working as a dentist in Glen Ellyn, loving his role as grandfather and great-grandfather.

Ranking high on his list, though, was a 2012 trip to Washington, DC, to see the World War II Memorial as part of a group of veterans on an Honor Flight. The all-volunteer, non-profit Honor Flight Chicago organization flies World War II service members to the nation’s capitol for a whirlwind day of sightseeing in tribute to their service.

The trip began with a coincidental conversation with his physician’s nurse when he went in for a pacemaker check. The nurse, a volunteer with Honor Flight Chicago, asked if he was a veteran and whether he had been on an Honor Flight. Once his paperwork was completed, the October 2012 trip was on.

“We left at 4 a.m. and were back before midnight,” he remembered.

In between, the group saw the World War II, Vietnam War, Washington and Lincoln memorials, as well as the Air and Space Museum. He sat between a Tuskegee Airman and a woman who was an airplane mechanic in the war, both very humble about their service.

Still, the Honor Flight volunteers made it their mission to make the experience a full and memorable occasion.

“The airports were full of well-wishers,” Dr. Banks said. “What astounded me most were the people who met us at the airport in huge numbers. They reached out to shake hands and were waving flags.”

An Andrews Sisters tribute trio “sang all the old-time songs,” and the Honor flight departed in style with water spouts shooting over the planes, a tribute usually reserved for retiring Air Force officers.

“It was wonderful. I was so overwhelmed at all the things around me,” he said.

Dr. Banks grew up outside the small town of Pittsburg, about 60 miles north of Cairo, IL. He was drafted on the occasion of his 18th birthday and entered the U.S. Navy before he could finish out his senior year of high school.

Training first as a naval hospital apprentice first class, Dr. Banks spent his first years at Great Lakes Naval Station in North Chicago. He later was shipped to Bethesda Naval Hospital in Maryland, where he saw a bulletin board posting for dental assistants. After completing that training, he worked with incoming recruits, taking down their dental histories. Later, he volunteered as a prosthetic dental assistant, working with U.S. Navy dentists to make dentures for soldiers. Another posting took him to the recruiting station in Bainbridge, MD; the war ended before his petition for sea duty was called up.

With a taste of medical and dental work behind him, Dr. Banks took a job with Hines Veterans Hospital in Maywood, where he worked as a circulating nurse. It was an anesthesiologist friend there who gave Dr. Banks “the boost in the butt that I needed” to go back to school and on to a dental career.

He started at Jacksonville College, living with his aunt who set him up on a date with the nursing student who would become his bride. They raised five children during their 65-year marriage.

“She was the star of my life,” he said. Stella died in July 2013, months after celebrating their 65th wedding anniversary.

After Dr. Banks and his wife returned to the Chicago area, he completed his studies at Loyola University. His first break came working at a state girls’ reform school in Geneva, IL. After a couple years, a kindly supervisor allowed him flexible hours so Dr. Banks could get his own dental practice off the ground in Glen Ellyn.

An engaging conversationalist with a razor-sharp memory, Dr. Banks has enjoyed an active retirement since hanging up his instruments in 1996. Travel, golf, church activities and a “comfortable recliner” have helped fill his retirement years. A long-time CDS member, Dr. Banks still helps at the registration table during the Midwinter Meeting.

“I never was more than 80 miles from home before I went into the service,” said Dr. Banks, who marks his 90th birthday in June. “Since then, I’ve met all these people from all over the country and world. Life has been good.” 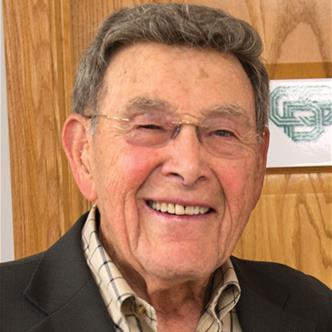