After he hangs up his handpiece for the day, the Clarendon Hills dentist heads into a world of crime, suspense and horror as a writer of short stories and the recently published novel, One Man’s Castle.

Dr. Major described his 2013 book as a cross between The Fugitive and Death Wish, a “gray and ambiguous” story that has garnered enthusiastic reviews and the 2014 Lovey Award for Best First Novel at last winter’s Love is Murder Midwest conference.

“It’s such a huge thrill,” Dr. Major says of his award, reviews and growing reputation.

A love of reading and writing started in childhood for Dr. Major, who grew up in Schaumburg. He churned through the classics alongside the books of favorite authors Agatha Christie and Erle Stanley Gardner (the Perry Mason series), then turned to science fiction. Inspired and looking to develop his skills, he began writing short stories for high school assignments.

Undergrad work at the University of Arizona and then dental school at Northwestern University were demanding and time-consuming and took a toll on his writing muse. But after finishing his boards, Dr. Major itched to return to writing. He sold his first science fiction short story to a magazine four years later. He honed his writing skills and published some three dozen short stories over the years, then found himself ready to tackle a novel, a work six years in the making.

One Man’s Castle is the suspenseful story of Walter Buczyno, who is left angry and bereft after his wife is killed by a burglar. When the murderer returns for him, Walter avenges his wife’s death and kills the man. He feels a sense of justice until police discover the bodies of the dead man as well as other burglars in his crawlspace, sending Walter on the run, “a wanted man hunted by the very authorities that had let him down before.” The book also explores the lives and foibles of the two police detectives who work on Walter’s case.

Quiet and reserved, Dr. Major said he sometimes surprises himself at his interest in crime and violence. “But a lot of what I write comes from combining some (news) event that bothers me . . . with some other unrelated item, and the idea is a reaction to this combination. I never know where an idea will come from or what it will involve.” Scenes he recalls from nightmares further inspire plot twists.

Dr. Major said he’s drawn to exploring questions and ethical dilemmas that gnaw at him, the motivations or sparks that lead to criminal activities. “I’m always interested in, Why does this have to be like this?”

He’s a member of the Horror Writers Association and the Chicago chapter of the Mystery Writers of America, whose members have cheered his successes and offered guidance. They encouraged him to begin a second novel based on the two detectives from One Man’s Castle, now in its early stages.

Dr. Major prefers to keep his dental and writing lives separate. He vetoed an idea to put a poster up in his office of his newly minted book after the publisher used a bloody hand on the cover. “You can’t put up a poster (like that) in a dental office,” he said, chuckling.

The seed for his day job — dentistry — also was planted in childhood. An accidental collision with a neighbor during a game of catch led to a broken tooth, Dr. Major said. As his family dentist — “always a great guy” — repaired the tooth, his interest was piqued. The dentist continued to explain his work during visits and finally encouraged the young Dr. Major to consider dentistry.

“I often wonder what would have happened if I hadn’t broken my front tooth,” he said.

Dr. Major lives in Willowbrook with his wife, Eileen, a pharmacist. They have a son, Derek, who is studying accounting and finance at Drake University in Iowa, and a daughter, Colleen, who attends Hinsdale Central High School with an eye to study elementary education after graduation. 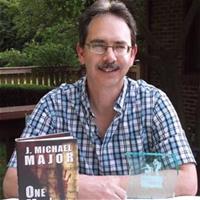