As a child, Frederick Orendach would hop on the “L” in the Englewood neighborhood and ride it to visit Chicago’s many museums.

“It was a thing of wonder,” he said of those childhood visits

For the last four years, Dr. Orendach of Burr Ridge, alongside his wife, Marie, has volunteered between 200 and 250 hours anually at The Field Museum of Chicago, mostly on Sundays.

“I love it. You meet lots of interesting people,” he said. Among them he named primate authority Jane Goodall and Sue Henrickson, who discovered the dinosaur at the center of the Field Museum’s SUE exhibit. It is the largest Tyrannosaurus rex skeleton yet found.

Along with meeting experts, he also enjoys interacting with museum visitors.

“I love to see families with kids and teenagers coming in,” he said. “They have so much wonder.”

Dr. Orendach, now the West Side Branch president, said he was first inspired to volunteer years ago when his daughter Alison, then 12, volunteered at the museum with Marie, who has been doing the same for 20 years. But with a busy dental practice, he put that plan on hold

So it was four years ago, with his love for the city’s museums riding high and his Englewood dental practice slowing down, that Dr. Orendach thought it the perfect time to join his wife in her volunteer post.

“It (fewer hours in practice) gives me time to give back what I was given as a kid,” he said. “Not a day goes by that I don’t pick up one or two new things.”

As a volunteer, Dr. Orendach often leads tours of the museum; he especially enjoys focusing on traveling exhibits. He noted the museum trains its volunteers well so that they are knowledgeable of the exhibits and can answer visitors’ questions.

Some of his favorites are an ecological restoration exhibit as well as traveling exhibits on China, Cleopatra and King Tut. He noted that the museum’s initial exhibit of the King Tut artifacts in 1973 prompted his membership to The Field.

“The museum is so, so diverse,” he said. “It covers so much of everything.

A 1967 graduate of the Loyola School of Dentistry and a St. Rita High School alum, Dr. Orendach is as proud of his hometown as he is the museum

“Chicago is the nicest city in the whole darn world,” he said. “It has the cleanest streets, a diverse culture, and the nicest people. I wish I could volunteer at every museum.”

In addition to The Field, Dr. Orendach enjoys visiting the Museum of Science and Industry — a childhood favorite — as well as the Chicago Historical Society and the Chinese American Museum in Chinatown.

Dr. Orendach currently sees patients — some of whom he has treated for 40 years — two to three days a week. Whenever he decides to retire, increasing his volunteer hours is near the top of his list of priorities, he said. 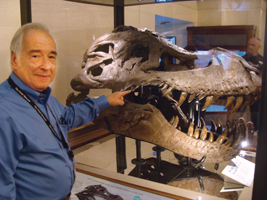