Lawrence Muller finds there is no place to go but up

In 1963, National Geographic published an article on the first Americans to summit Mount Everest. Lawrence Muller, then age 11, read the article and felt a strange desire to climb mountains one day. Sixty years later, this 1987 graduate of the University of Illinois at Chicago College of Dentistry said that “somehow the bug came back to do it.”

Now a practicing dentist in Woodbridge, VA, Dr. Muller and his wife ventured to Washington’s Mount Rainier National Park in 2010. On their vacation, they saw hikers leaving for treks up Mount Rainier and thought that would be a great next step; their normal hiking and backpacking was getting a little boring.

The two of them researched three services that lead treks up Mount Rainier, and then began their strict training regimen to prepare for the three-day trek.

For six months, Dr. Muller and his wife adhered to a training program that was seven days a week with no breaks. Three days during the week they would do the StairMaster with a weighted backpack. Alternating days they would do weights and flexibility. And one day per week they would do a local climb for 8-10 miles. Their diets consisted of eating a lot of calories to replenish what they burned off during their training.

This past July, loaded down with mountaineering gear consisting of helmets, harnesses, carabiners, poles, ice axes, boots and crampons, Dr. Muller and his wife made their way back to Washington. Upon arrival, the guides looked at all of their personal equipment to make sure it was ok for the ascent.

“The most exciting part was ascending a 40-foot vertical ice step,” said Dr. Muller. “It required a great deal of focus, not looking down, a firm grip on the rope and the ice ax and making sure your crampons were stuck in the wall.”

Lawrence Muller 2But climbing a mountain doesn’t come without its scary parts as well. There were three ladders put in place throughout the trek that the group needed to cross to make it over gaping crevasses.

“Everybody is wearing a harness and connected with a rope,” said Dr. Muller. “There is one hand rope at each ladder and the guides advise you not to look down and just concentrate on foot placement. Looking down causes a bit of disorientation.”

Upon reaching the summit, Dr. Muller thought the universal, “Wow, this is what it’s all about.” And then he asked himself, “Why did I wait so long to do this?” 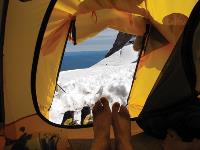 Dr. Muller said, “The view is hard to describe. You’re 5,000-6,000 feet above the clouds. There are adjacent peaks poking through the cloud layer. We only spent 10 minutes up there, as it was 25 degrees with a 35 mph wind. It was very difficult to stay warm.”

They descended the mountain and arrived at the base at 3 p.m. — 16 hours of straight hiking.

“After a 16-hour day, it was the best cheeseburger and beer I’ll ever have,” joked Dr. Muller.

The six months of training paid off though, as Dr. Muller was the oldest person in the group and out-climbed some of the people in their 30s.

While Dr. Muller is still in shape from this climb, he plans on tackling Mount Aconcagua in Mendoza, Argentina, next. Aconcagua is the highest mountain in the Western and Southern hemispheres at 22,841 feet.

Dr. Muller isn’t the only CDS member to set his sights on Mount Rainier. In June 2010, CDS past-president Ian Elliott and current president David Fulton Jr. traveled to Mount Rainier to attempt to summit the mountain, but due to blizzard-like weather conditions turned back at 12,500 feet.

Undeterred, they returned in June 2012 with Michael Durbin, Loren Feldner, Fabian LaTocha and Thomas Schweitzer. This time they reached 12,800 feet before having to turn back due to 50 mph winds and ice-covered snow.

While both climbs coincided with the Pacific Northwest Dental Meeting, there is clearly something about the mental and physical challenge that draws dentists. Dr. Fulton believes that “most dentists are cut from the same mold and want to test themselves constantly.”

On his experience of climbing it twice, Dr. Fulton said, “Some men look up at the majesty of Mount Rainier and stand there in awe and think, ‘what a spectacular mountain.’ I look at it and say, ‘wow, what a spectacular view from the top it will be!’” 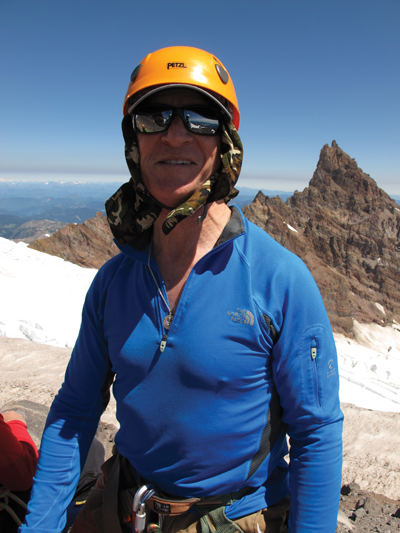