South Holland dentist John Magon was inducted into the Illinois Aviation Hall of Fame in 2012. Candidates for the Hall of Fame must have been involved in some aspect of aviation in Illinois for at least 15 years and made a substantial contribution to the development of Illinois aviation with a high degree of excellence.

Not a problem for Dr. Magon, who has been making contributions to local aviation since 1965.

That year, Dr. Magon’s passion for flying took off. He told his wife, Patricia, that he wanted to learn to fly because an oral surgeon friend had invited him to go flying.

“I said ‘I think I’d like to go do that.’ And she said, ‘No John, you are not going to do that. We are going to do that,’” said Dr. Magon, a 1958 graduate of the Loyola University School of Dentistry.

The pair signed up for flying lessons at the Lansing Airport. Dr. Magon remembers clearly what a exhilarating experience his first flight was.

“It happened so fast I didn’t have a chance to be petrified. I added the power, I went down the runway, and before I knew it, I was flying,” he said.

On the sidelines were his wife, waiting for her lesson, and her mother.

“My mother-in-law thought we were nuts,” said Dr. Magon. “She said that she was going to end up taking care of our four children because ‘Goofy and Goofier’ were at the airport learning how to fly.”

Little did she know then that both Dr. and Mrs. Magon would go on to earn private pilot’s licenses and co-own a plane with a physician in 1966. And that all four of the Magon children would grow up to become commercial airline pilots.

“My daughter Kate has been flying a Boeing 767 for American Airlines on the international route for the past 12-14 years,” said Dr. Magon proudly, noting that only 6 percent of American pilots are females.

In addition to teaching all four of his children and one grandson to fly, Dr. Magon has been a flight instructor since 1973; he currently teaches at the Gary Airport. He has accumulated more than 13,000 hours of flying time during his career.

For the past 10 years Dr. Magon has also been the safety officer for the Flying Dentists Association, a professional and social association devoted to continuing dental education combined with aviation and family fun. There are about 250 members.

“I’ve gone into [aviation] with much joy. It has been a great experience for me,” said Dr. Magon. “I hope to continue just flying and teaching.” 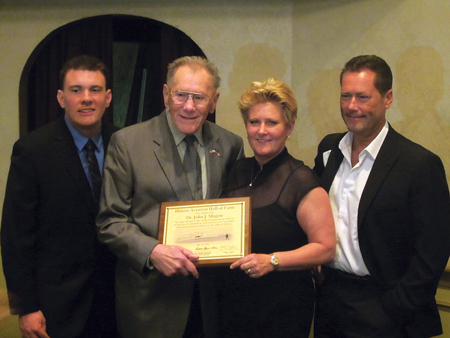