Several days a week Greg Duffner bikes to his Homewood dental practice from his Frankfort home. The recent mild winters and shower facilities in his building allow the dentist to make the journey year round.

“Cycling keeps me in shape both physically and mentally,” Dr. Duffner said. “Since I have to go to work anyway, I would rather cycle there. That way I get in some exercise. I’m happier and more energetic when I get there.”

The 27-mile round-trip commute also prepared Dr. Duffner, 54, to check an item off his bucket list in June: a 3,667-mile cross-country bike ride for Mercy Housing.

One of Dr. Duffner’s friends, Bill Goldsmith, works for the housing non-profit and formed the team, along with Jim Andricopulos, Mark Bucherl, Emil McCauley and Keith Melbourne. Together they became the Mercy Riders

“It was phenomenal, epic,” Dr. Duffner said of the experience. “I would do it again in a second.”

Dr. Duffner got a taste for long bike rides when his sister, Barb, suggested they bike from her home in Florida to Chicago. It was 1985 and Dr. Duffner had just graduated from dental school at the University of Illinois. During the ride, they met cross-country cyclists and Dr. Duffner was intrigued. “I’ve wanted to do it ever since,” he said.

The Mercy Riders began their six-week journey in San Francisco. They rode through Denver, Chicago and Washington, DC, before ending the trip in Rehoboth Beach, DE. Along the way, they were supported by Dr. Duffner’s sister, Barb, and others who rode alongside in a van filled with supplies. They took care of meals, laundry and setting up camp for the team.

While the ride was physically challenging — they rode an average of 102 miles a day — Dr. Duffner said they only encountered three hours of rain during the entire trip.

“The weather was a gift from God,” he said.

In Chicago, the Mercy Riders were greeted by family members and friends, cheering them on.

“It was one of the greatest welcome-homes I’ve ever gotten,” Dr. Duffner said.

Along with “memories that will last a lifetime,” the Mercy Riders raised $60,000 for Mercy Housing, one of the nation’s largest nonprofit affordable housing organizations. In October, they were honored with the Spirit of Mercy Award at the organization’s Moving Forward Together fundraising event.

Along with commuting to work, Dr. Duffner has ridden in more than 30 fundraising bike events. Every year he rides for the National MS Society to help raise funds to cure multiple sclerosis.

His love for the sport is shared with his wife, Rosemary McGrath, a family practitioner in Mokena who often joins him on a tandem bike. Daughters Eileen, 22, and Caitlin, 18, share their parents’ passion. Only son Brendan, 20, has not yet caught the biking bug.

Dr. Duffner typically logs more than 6,600 miles a year on his bike. This year, he reached that number by early fall with no plans to slow down.

“One of my favorite things is when a bird takes off and flies alongside me or just in front of me for 50 yards or so on the trail,” Dr. Duffner shared. “I’ve ridden with a red-tailed hawk flying along with its breakfast in its talons. You don’t otherwise get to see such a thing that close up. It’s a great show.”

SIDEBAR: A VISIT TO THE 9-11 MEMORIAL

Following the end of the trip at Rehoboth Beach, DE, Dr. Duffner and some of his fellow Mercy Riders visited the 9-11 Memorial in Washington, DC.

"I arranged the route for the bike trip to go right by the Flight 93 crash site and memorial in Pennsylvania.  When we visited the Capitol Building, we saw the plaque dedicated to the men and women on the plane who fought back and kept that plane from striking it," Dr. Duffner wrote.

"Each bench has the name of someone who died in the attack.  The benches pointing away from the Pentagon are for those on the ground.  Benches pointing toward the building are for victims in the plane.  Each bench has a small pool under it which is illuminated at night.  It gives the whole space an eerie glow.  The benches are laid out to form a time line which stops for all the victims of 9-11.  The benches toward the right in this view are closest to the 9-11 time line and are for younger victims, starting with the 3-year-old little girl on the plane.  The benches toward the left are for the older victims, the oldest being about 73.  It's a very beautiful, dignified and thought-provoking memorial." 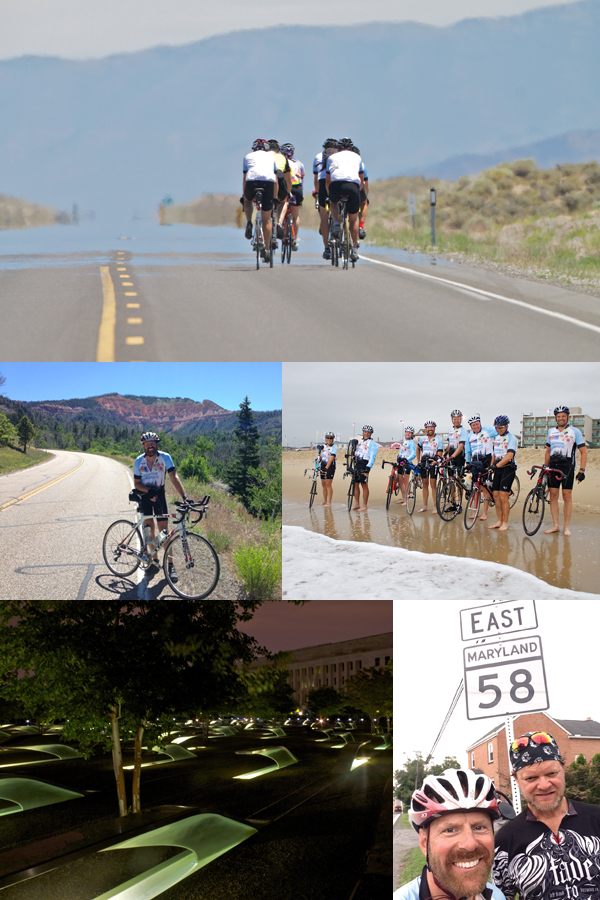