Eric Jackson goes to bat for the Bandits

It was just a few months ago that Chicago Dental Society member Eric Jackson found a message on his LinkedIn account from the Chicago Bandits, a women’s professional fastpitch softball team. They were looking for a team dentist.

Little did the team know that Dr. Jackson, a 2005 graduate of the University of Illinois at Chicago College of Dentistry, has a bit of history with softball. Both his wife and sister-in-law coach softball at Lyons Township High School in LaGrange. And they have all been avid Bandits fans since the team’s inception in 2004.

As the clock ticked down toward Opening Day, Dr. Jackson geared up to fit the women for their mouth guards.

“[Regarding injuries], pretty much anything you have seen in major league baseball you can see in professional softball. You can get hit by a pitch, especially in the mouth, or a ground ball can take a bad hop and jump up. With all those sorts of things you obviously have to protect the professional athletes as best you can,” he said.

So far, Dr. Jackson has only met a handful of the players, since most of them live out of state for a large portion of the year. He attended their 2013 Collegiate Draft Night in Rosemont to watch the live stream from ESPN3 on the big screens of the draft happening live in Nashville.

“It was great to sit with current team members watching these ‘dreams come true.’ The players were excited, happy, debating who was going to be drafted. It was really fun to be at live, and it was a really great time,” said Dr. Jackson.

During the season, Dr. Jackson is required to be on call in case of any injuries. But he expects to also attend some of the games as just a fan with his daughters.

“It’s kind of like that classic baseball experience: you sit down, have your kids next to you, get some popcorn or peanuts and you’re in good shape,” said Dr. Jackson.

As a father of two girls, he thinks that the Bandits’ new stadium is a great place to see professional women playing a sport. And he appreciates the fact that the players sign autographs after the games.

“[The players] are amazingly skilled athletes and role models,” said Dr. Jackson. “Fastpitch softball, there is no men’s equivalent. I like the uniqueness of it.”

Dr. Jackson is looking forward to the season opener June 1 against the Indiana Slammers.

“I have had such a good time meeting the players — even though it’s only been a few of them,” said Dr. Jackson. “When they all get into town, it will be really great to be a part of the team. I can’t be more excited.”

Jennie Finch, who Time magazine once described as the most famous softball player in history, joined the Bandits in 2005 after winning a gold medal at the 2004 Olympics. She retired in 2010.
In 2011, the Bandits made history. Its stadium was the first built solely for a women’s professional sports team. Its address, appropriately enough, is 27 Jennie Finch Way, Rosemont.
The stadium capacity is 2,000.
The team colors are black, orange and blue.
The team mascot is a raccoon named Outlaw. 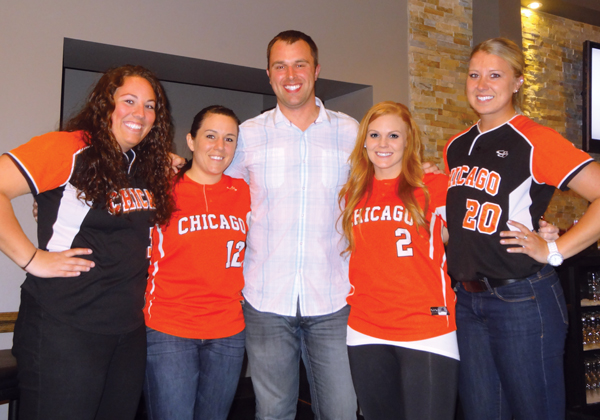