Steve Kahn is at home with his inner child

Some people wonder why anyone would collect anything. Steven Kahn said his reason is simple.

“When we are experiencing stress in our lives, it is especially comforting to have something that either makes you feel good or reignites some memory from the past that gave you a good feeling,” said Dr. Kahn, a 1970 graduate of the University of Illinois at Chicago College of Dentistry. “I think that is the greatest attraction of collecting for me. It gives you something that recreates something from your past that feels good.”

Steven KahnDr. Kahn doesn’t remember a time when he wasn’t collecting. As a young boy, he waited every Friday evening for his father to come home from his trips as a traveling salesman. Mr. Kahn arrived with little wrapped bars of soap from the motels he had stayed at. This was Dr. Kahn’s first collection.

Since then, the Chicago-based oral surgeon has expanded his collection to include comic books; he guesses that he has 100,000-200,000 comics. He also has an extensive collection of toys that appealed to boys growing up in the ’40s, ’50s and ’60s.  And while Dr. Kahn doesn’t read his comics, he collects and appreciates them for a different reason.

“I think [comics] are the most underappreciated art form in America,” he said “I think it’s great art.”

Dr. Kahn believes that finding his collectibles is the fun part of his hobby. While he can’t reveal exactly where he gets his collectibles because the marketplace is so competitive, he said he travels with wide-open eyes. Dr. Khan has traveled to Indonesia, Afghanistan and India, and has found objects that showed artistic expression.

“Many of my most dear collectibles are not necessarily valuable or beautiful, but I may have lived with the artist or shared something with the artist that was very special,” said Dr. Kahn.

With all of the things he has been collecting, Dr. Kahn has outgrown his storage lockers; he finally bought a warehouse in Kenosha, WI, early in 2011.

“When you go over 100,000, you get a reality check,” said Dr. Kahn. “And you start to realize you’re not going to take it with you, and that maybe it’s time to start letting it be enjoyed by others.”

Dr. Kahn and his family spent time cleaning and converting the warehouse they purchased in the historical area of downtown Kenosha into a 2,500-square-foot storefront. They named their store the Inner Child because the items in the store make your inner child feel good and brings you back to your childhood.

Upon entering the store, anyone born after 1950 will find things that remind them of their youth. Both sides of the store highlight figurines and vehicles from many of the characters in pop culture. In the back left are comfy leather chairs where visitors can play Nintendo games; you just need to pick up the controller and pick from the hundreds of games Dr. Kahn’s son has collected.

The back of the store is the wall of comic books ranging from the Silver Age, Golden Age and Bronze Age. Ten thousand comics are displayed in boxes. And while some of the comics are first editions (pictured) — and quite pricey — most of the items in the store are reasonably priced.

“I’ve been able to capture multiple generations of collectibles and have examples of toys and fun things [customers] grew up with,” said Dr. Kahn. “That’s probably been the nicest part about having the store thus far.”

Dr. Kahn loves sharing his stories and collectibles with people of all ages, and is delighted he can share his things with the little community of Kenosha.

“As I’ve grown older, I’ve truly begun to realize that you really can’t take it all with you. Whatever you obtain in life, whatever you accumulate in assets or material possessions, stay here when you leave,” said Dr. Kahn. “So at some point in time you have to figure out a way to share what you have obtained with others.” 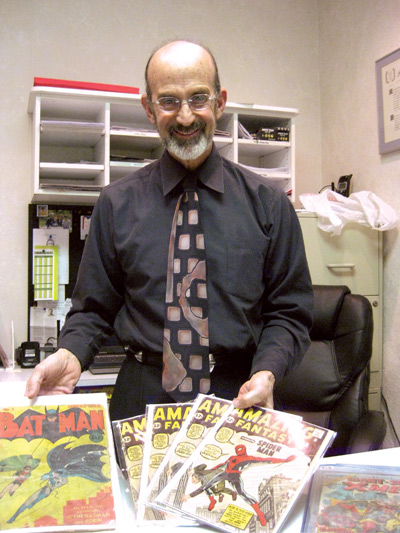