Most people have never heard of Lynch Syndrome. In fact, only 5 percent of individuals who have the disease know they have it. It’s this lack of knowledge that has Sharon Perlman on a mission.

In 2010, Dr. Perlman and her brother, Neil Perlman, cofounded the Colon Cancer Alliance for Research and Education for Lynch Syndrome (CCARE Lynch Syndrome).

Lynch Syndrome is a genetic disorder of a mismatched repair gene defect; people with Lynch Syndrome don’t have an ability to repair cancer-causing cells in their bodies. It’s the most common genetic cause of colon and uterine cancers, and it’s responsible for a number of other cancers, including ovarian, stomach, pancreatic, bioduct, brain and it was recently linked to breast cancer. People with Lynch Syndrome have a 50 percent chance of passing it on to their children.

Having lost three family members with the disease, the Perlmans felt that it was finally time to take action.

“I realized there was a real lack of knowledge and awareness about Lynch Syndrome,” said Dr. Perlman. “We wanted to develop an organization to increase awareness so that we can save lives.”

The foundation also aims to stimulate research. It even established a research award administered through the Society of Gynecologic Oncology.

“I like to say we’re leading the fight against Lynch Syndrome through education, advocacy and research,” said Dr. Perlman.

CCARE Lynch Syndrome is a national organization which has partnered with other organizations like Facing Our Risk of Cancer Empowered (FORCE), the Ovarian Cancer National Alliance, and the Foundation of Women’s Cancers, and they contribute to a number of websites including Fran Drescher’s Cancer Schmancer Movement (www.cancerschmancer.org).

In addition to these partnerships, CCARE Lynch Syndrome is getting the word out through its own website, social media and community programs. They hosted a Lynch Syndrome screening and health fair at North Shore Evanston Hospital and teamed up with the Robert H. Lurie Comprehensive Cancer Center at Northwestern Hospital to mark Colon Cancer Awareness Month in March.

At the end of June, CCARE Lynch Syndrome hosted its second annual night of improv and stand-up comedy — because laughter is the best medicine.

“We want to bring laughter to the disease,” said Dr. Perlman. “It’s a fundraising event and a lot of fun.”

Dentists can help in this effort by being aware of the disease and looking for the signs and symptoms that might be reported by patients; getting a complete health history of every patient is an important start. If the dentist identifies a pattern, check out the CCARE Lynch Syndrome website for more information (see below).

“Every time I communicate with an individual who suspects they have Lynch Syndrome, I have helped them and have provided motivation and hope, and that is a momentous occasion for me,” said Dr. Perlman.

For more info about Lynch Syndrome 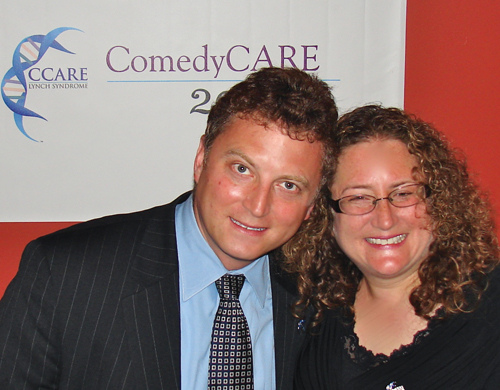