Glenn DeWeirdt has a need for speed

Glenn DeWeirdt has always been “a car guy.” And for years he wanted to get involved in racing on some level. A year ago, Dr. DeWeirdt finally gave himself the chance.

Dr. DeWeirdt, a 1984 graduate of the Northwestern University Dental School, was professionally trained to participate in amateur motor sports race events. He equipped his Porsche Boxter for both street and track use by using different brakes and tires that are street legal but a bit stickier for the race track.

The first step was to take an accredited course, a three-day class at the nationally recognized Skip Barber Racing School. This enabled Dr. DeWeirdt to get a Sports Car Club of America license and gave him the basic skills needed to go on a track to race competitively.

“They teach you the principles that you need to be able to maximize the performance of your car and do it safely in the presence of other cars on the track,” said Dr. DeWeirdt, a general dentist in Woodridge.

“[Fixing up the car] is something that I do myself. I actually have a little shop set up in my garage with a lift and tools. It’s kind of fun,” he continued. “So I do my own brakes, oil changes — what we would consider minor types of things.”

Along with his Porsche, Dr. DeWeirdt has been doing Spec Miata racing with Mazdas supplied by Skip Barber’s school. And he’ll be taking an advanced class in July at Road America in Wisconsin to learn about Race Prepared Mazda Miatas.

But on Sundays, he goes to a karting with his 18-year-old son, John.

“They aren’t go-karts,” said Dr. DeWeirdt. “They look like them, but they are very fast. On half-mile long track we hit speeds of almost 60 mph.”

Going 60 mph on a track, though, doesn’t come without the possibility of injuries. Karts in general are pretty safe; because they are so low to the ground there isn’t a possibility of it turning over, just of them spinning.

“The worst thing that ever happened to me is that I spun into the infield and my side hit the side of the seat. That was when I ended up with bruised ribs and why I now wear rib protectors,” said Dr. DeWeirdt.

However, spinning out in a racecar is a bit more dangerous. Dr. DeWeirdt’s most memorable moment thus far has been driving on the Road America course at almost 100 mph on a wet day. On the course, one of its more famous turns is on the backside known as “the Kink.”

“The car got loose and it started to slide,” said Dr. DeWeirdt. “The problem with the Kink is that it’s a very high-speed turn that you’re taking flat out. I didn’t crash, but I did lose control and was able to regain it. That was very memorable.”

Looking down the road, Dr. DeWeirdt has some more racing adventures that he would like to try. While Road America is one of the first grand-prix race courses in the United States, Watkins Glen in New York was the first.

“Watkins Glen or Mid-Ohio would be the courses that I would really love to run,” said Dr. DeWeirdt. But his next step will be to get set up with a dedicated racecar by building one or buying one.

“That’s going to take some doing to with my wife, though,” joked Dr. DeWeirdt. 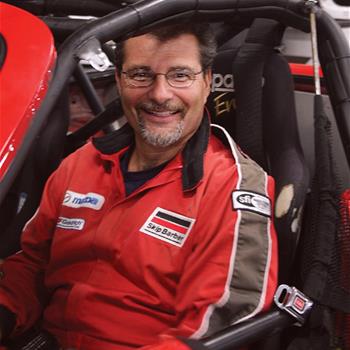