In late 1993, David Fiore purchased an old bicycle shop located at 1170 W. Armitage Ave. and renovated it to house his new dental practice. Build out took a long time, but Dr. Fiore’s practice opened its doors in 1995.

The desirable location was worth the wait. Armitage Avenue in Lincoln Park is currently renowned as a great shopping district, but it is also a local landmark. Its history dates back to 1870, and the buildings still resemble what they looked like back in the day. Before the dental office and before the bicycle shop, 1170 W. Armitage Ave. was the home of the West End Music Club.

Operated in the late 1970s and ‘80s, the West End Music Club was one of the very first music clubs to allow underage audiences. Talent buyer Sue Miller became well known for supporting and booking local and touring punk and indie bands like Urge Overkill, the Minutemen, Red Hot Chili Peppers and The Replacements. She later joined Julia Miller and Jennifer Fischer as owners of the Lincoln Park music venue Lounge Ax.

Dr. Fiore, a 1985 graduate of the Loyola University School of Dentistry, was not fully aware of how much history his new address had before he opened his practice. But after Dr. Fiore purchased the building he noticed some interesting things on the basement walls.

“There must have been a green room down there because there are a lot of bands that were popular in the ‘80s, that were doing the circuit, that wrote on and graffitied the wall,” said Dr. Fiore.

Right now that section of the wall is covered in plastic and behind a shelf, but it still stands as a reminder of the history the building holds.

“During the construction phase, I had a guy doing the sound system,” said Dr. Fiore. “He was in a band and he told me that his first ‘gig’ was there at the West End. The band was called the Grand March.

“I knew beforehand that (the building) was a music club, but when he came around he started telling me a little about the place and what went on there.”

Upon opening the dental practice, one of Dr. Fiore’s patients was Walt Klein, the owner of the West End Music Club. Mr. Klein went on to own the Vic Theater in 1983, and  brought top musical acts to Chicago. The Chicago Tribune reported in his obituary Feb. 2, 2010, that Mr. Klein helped almost 200 children afford surgeries to repair cleft palates through his contributions to Smile Train.

“He recently died,” said Dr. Fiore. “But he was a real nice, great guy. He had lots of stories.”

While the building is full of musical history, Dr. Fiore doesn’t promote the rock ‘n’ roll theme in his dental office. The practice was named Westend Dental as a nod to the club, but also because it’s at the west end of Armitage Avenue.

“We do play a lot of rock ‘n’ roll music though,” said Dr. Fiore. “We used to have WXRT on all the time, and 20 years ago that was radical. Now we pipe in the music through a music service.”
Categories :
Tags : 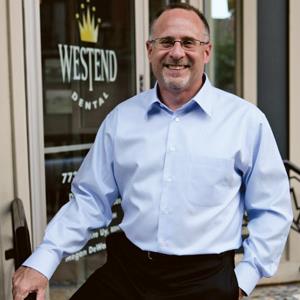