Spencer Bloom's work is a cut above

Six years ago, Spencer Bloom came across the hobby of scroll sawing while browsing through the library. Scroll sawing is a type of woodworking where a motorized tool (called a scroll saw) is used to create intricate curves and joints in wood. By chance, Dr. Bloom had also just moved into a house with a tiny room in the basement perfect for his new wood shop.

Dr. Bloom, a 1979 graduate of the University of Illinois at Chicago College of Dentistry, went out and purchased a scroll saw, a relatively safe electric tool compared to many others in woodworking. As a dentist, his hands are finely tuned to do intricate work using small tools.

“I’m used to paying attention to very small areas at a time. When scroll sawing, I’m focusing on where that blade meets the pattern line,” said Dr. Bloom. “I feel like it’s very natural for a dentist.”

Like in dentistry, it’s important to continue your education to learn new techniques and tools in the industry. In scroll sawing, mini-conventions are held: scroll saw picnics. Dr. Bloom went to his first scroll saw picnic in Texas this past June.

He found the picnic to be so energizing that he traveled to Wisconsin for a second picnic in August. At both gatherings, he won the blue ribbon first prize for his pieces.

With all the projects that he creates, Dr. Bloom has donated quite a few, and the rest are given away as gifts; very few are in his possession. Dr. Bloom created a plaque of the Chicago Dental Society logo for a North Suburban Branch fundraiser, and also the outgoing presidents’ gifts for the Northwest Side Branch.

When looking for ideas for his projects, he usually turns to a pattern or a picture that inspires him.

“My interpretation of [the pattern] usually involves more dimension. A lot of the patterns are for flat projects, and I got bored with them early on. So my take would involve adding dimension to what might be a flat project,” said Dr. Bloom.

There are many online forums for scroll sawing, where talented designers offer patterns for free. It has helped Dr. Bloom build a large library of patterns.

“Without these forums, I don’t know that I’d have quite the interest,” said Dr. Bloom. “But you get to meet and converse with people back and forth, and it was fascinating at the picnic to meet many of these people.” 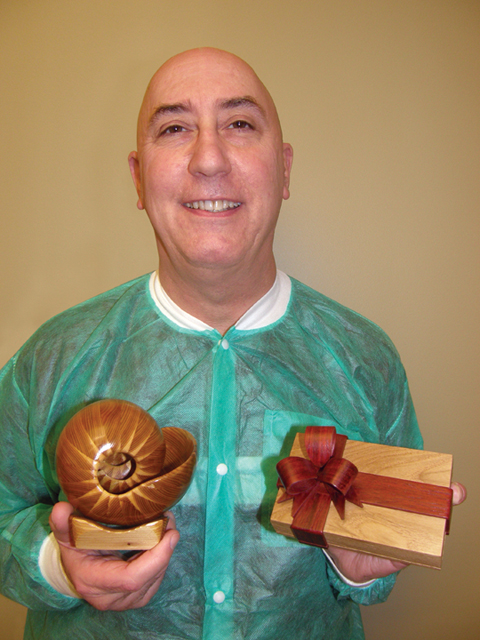