Paul Muhr will show you around

Imagine setting aside one day each week to step away from the office and household chores that await you. Instead, you might wander a local park, taking in the sights and feeling the sun on your face.

Paul Muhr does just that, leading tours of Millennium Park as part of Chicago’s Greeter program every Thursday during the spring, summer and fall. Chicago Greeters are a free service of the Office of Tourism. Volunteers informally highlight Chicago attractions and neighborhoods for interested visitors, individually or in small groups.

“The concept is to feel like you have a friend in the city who is taking you where they like to go,” said Dr. Muhr, who graduated from the Southern Illinois University School of Dental Medicine in 1979. “There are still foreigners who think Chicago is Al Capone, gangs and fear, so having a guide empowers and enables people to explore the city and make it their own. If they want to see the cultural sides of the neighborhoods, they can go with a greeter and know they’re safe.”

Greeters also show guests how to navigate the city by bus and train, so that they might continue sightseeing throughout their stay in Chicago.

Dr. Muhr gave his first “tour,” if you will, more than a decade ago, when the City of Chicago hosted two people from each country in the world for a week-long millennium celebration. Dr. Muhr and his wife, Linda, were paired with a young Russian couple and their daughter to take on different activities around Chicago each day.

“The city asked us to host these visitors so that they didn’t feel lost in a crowd,” Dr. Muhr explained.

It was for the same reason that the city established the Chicago Greeter program two years later. Modeled after a pilot program that lead tourists through New York City, Dr. and Mrs. Muhr were eager to continue working with the Cultural Center when the Greeter program launched locally.

Mrs. Muhr’s job in the airline industry offers flexibility for her to host neighborhood tours. Visitors call ahead to schedule a mutually convenient time to explore a particular section of Chicago.

Dr. Muhr prefers Millennium Park tours, which he leads every Thursday (his day off) at 11:30 a.m. and 1:30 p.m. Though the unscripted tours are supposed to last an hour, Dr. Muhr said his run closer to 90 minutes – and if you take the latter tour, he’ll stay in the park as long as you like.

His knowledge of the park and its features is plentiful. Dr. Muhr and other park tour guides took courses at the Cultural Center before the park opened; contractors, designers and landscapers taught them about the park’s features. Most interesting, he said, were the way engineers spent lots of time testing the water pressure at the Crown Fountain to be sure that the water spit at the perfect level – not so hard that it knocked visitors over, nor so soft that the faces in the fountain appeared to be drooling.

Though frequent updates give guides more than enough facts to share with visitors, Dr. Muhr said the impromptu nature of the experience can be intimidating.

“When I started it was a little scary in a way because you have no idea of who or how many people will be there any day so you can’t plan for how you’re going to engage them,” Dr. Muhr remembered. “English may not be their first language or you might have kids and teenagers. One day I had the Red Hat ladies.

“But I think it’s helped me in dentistry. I have a general and family practice, so meeting different people on the tour is a little like moving from patient to patient.”

“You meet some of the nicest people from all over  – sometimes they’re suburban people, and sometimes they’re from Japan or Australia. I get so much benefit from it. Of course it feels wonderful to spend the day outside walking and talking. I just walk home on Cloud 9 because I always have such a great day, and I almost always learn something from them.”

To learn more about the Chicago Greeter program or to volunteer, visit www.chicagogreeter.com. 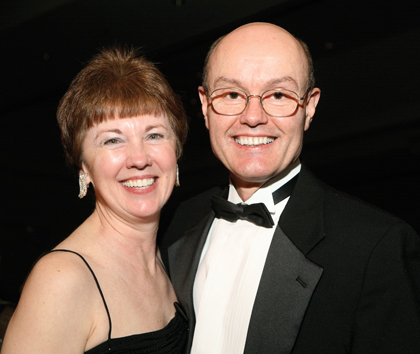