This July marks the 103rd Chicago Yacht Club Race to Mackinac. At 333 miles, the so-called Mac Race from Chicago to Mackinac Island, MI, is the oldest and longest fresh water yacht race in the world. This summer, nearly 375 boats will compete on Lake Michigan.

Among the sailors will be Glenview oral surgeon Paul Akers, a 1971 graduate of Loyola University School of Dentistry who has participated in 18 Mac Races since 1979. Growing up, Dr. Akers had been involved with water sports. He played water polo competitively in college and was a lifeguard at one of the Chicago beaches.

“I got interested in sailing and racing as a natural thing to do to stay near the water,” Dr. Akers said.

After dental school, when he was an oral surgery resident at Cook County Hospital, he and an orthopedic resident friend became partners on a sailboat.

“We cruised and raced on Lake Michigan and then became more interested in offshore racing,” said Dr. Akers.

After a few years, Dr. Akers upgraded his boat to a Nelson/Marek 45 and named it The Devastator. The boat has been raced in the Southern Ocean Racing Circuit along the southern coast of Florida, as well as Antigua Sailing Week, one of the largest regattas in the Carribean.

In 1979, Dr. Akers qualified for his first Mac Race after developing and training a proper crew; the longest freshwater race in the world is not to be taken lightly. In order to qualify for the race, the Chicago Yacht Club requires that at least one crew member must have experience racing the Mac; the boat needs to be active in racing; and the boat also needs to pass a rigorous test of safety requirements, equipment and gear. Not to mention the crew needs to be certified in testing of maneuvers of over-man drills.

Qualifying for his first race was exciting, but it came with a lot of concerns when actually competing.

“Extreme fear! Severe danger! Trepidation!” joked Dr. Akers. “Many thoughts go through your mind depending on whether you’re a crew member or owner/skipper. As a skipper you think, how well are you competing in the race? Or, will the boat and mast structurally hold up while pushing the limits of their design during the race?”
When racing, the goal is to outperform the other boats you’re up against, but there are always challenges.

“A few times we had 40 mph fronts coming from the northwest in the Manitou Passage and I have a good memory of possibly losing the mast,” Dr. Akers reflects.

Thirteen years after his first race in 1992, Dr. Akers won his first Mac Race in his section and came in fourth in his division.

“On the open lawn of the Grand Hotel they have an awards ceremony with all the [winning] sections getting flags,” said Dr. Akers.

These flags, called “brag flags,” fly from the mast of the boat before and after the Mackinac Race.

This year, Dr. Akers hopes to grab another brag flag when he sails in his 19th Mac Race racing on a crew member’s boat.
Categories :
Tags : 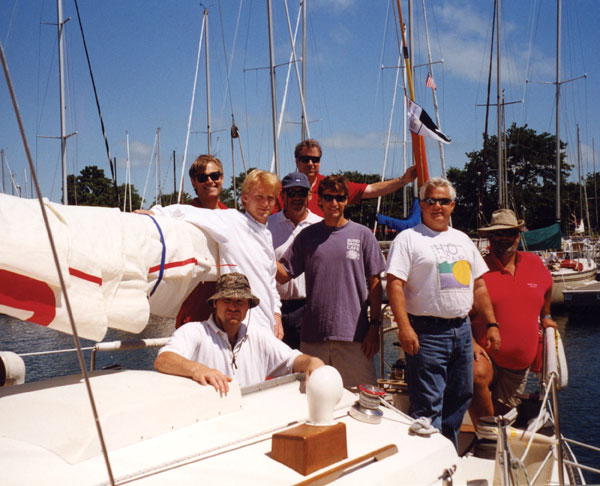