When Irwin Mishoulam was only 7 years old, his father took him to a dime store to buy a model airplane. Side by side, they put the model together. Several weeks later, after saving his allowance, Dr. Mishoulam went back to the store and bought another model to put together by himself. And thus started his life long love of building models.

His love for trains extends back to his childhood and early visits with his mother to the Marshall Field’s toy department to see the trains whir by on the tracks. It was Dr. Mishoulam’s cousin, though, that really peaked his interest because of his love for model trains.

“My cousin was about four or five years older than me, and he got a model train and I just became interested in it,” said Dr. Mishoulam. “I’ve always been interested in working with my hands. It’s a perfect hobby for me.”

Dr. Mishoulam, a 1975 graduate of the Loyola University School of Dentistry, started with an HO scale train set, which is the most popular. He then moved up to an O scale Lionel train set. He now works with G scale, which is three to four times larger than the Lionel.

The G scale set has grown so big that there are now 300 feet of track in Dr. Mishoulam’s backyard and six trains chugging along on the tracks. He calls his set up the Buffalo Creek Railroad.

“Most of my trains are steam engines that run through the Wild West. I have a coal mine, saw mills, a Wild West town where I depict characters from the Wild West,” said Dr. Mishoulam. “I have the famous Doc Holiday, Annie Oakley, Kit Carson and Davy Crockett.”

Dr. Mishoulam devotes about 10 hours a week to working on his backyard display. In the winter, he brings everything except the brass tracks inside and refurbishes the display by reglueing pieces and repainting. However, for the past 10 years for four to five hours every week Dr. Mishoulam has been volunteering at the Chicago Botanic Garden’s outdoor railroad.

“[Volunteers] set the trains up in the morning, clean the track, clean the locomotives and oil them, and take care of any problems that occur.

“For the first seven years I was the youngest volunteer in the railroad. I was one of the few that weren’t retired. So they would have me go in the water and pull trains out of the pond and climb behind bushes because I was the youngest, even though I was in my mid-50s,” said Dr. Mishoulam.

The display in the outdoor train exhibit includes buildings throughout the United States, different cities and National Parks. Some of the attractions included in the exhibit are the exploding Mount St. Helen’s volcano, Old Faithful shooting a water geyser, and Wrigley Field with Harry Carey singing “Take Me out to the Ball Game.” This past summer they put in a new Golden Gate Bridge and the year before that they put in real redwood trees that are now about 12 feet high.

For the past five years during the winter, the Chicago Botanic Garden has featured an indoor exhibit called the Winter Wonderland Express. “They have an indoor one they run around the holiday time. This will be my fifth year doing that,” said Dr. Mishoulam. “The buildings are all Chicago buildings in the winter.”

Dr. Mishoulam enjoys sharing his love of trains with others. This past July he invited some of his patients who had enjoyed the Botanic Garden railway to come see his home display.

“A lot of the kids go to the Botanic Garden, and I tell them I have one in my backyard and they say they’d love to come see it,” said Dr. Mishoulam.

Perhaps he’ll find that he sparked a child’s interest in trains just as the Marshall Field’s toy department and his cousin did for him so many years ago.

If you are interested in visiting the Chicago Botanic Garden this year to see the Winter Wonderland Express, Dr. Mishoulam advises that tickets sell out quickly for the event, especially when the kids get out of school for winter break. The exhibit runs through Jan. 1. 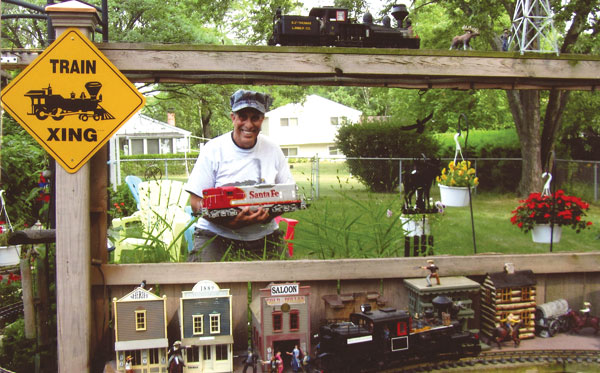