Bernie Reusz is on top of his game

Thirty-five years ago Bernie Reusz stood in his college dorm room thinking his roommate was nuts for asking if he wanted to referee a grammar school basketball game. But, perhaps it was the luck of having black pants and gym shoes and his friend’s extra whistle and striped shirt that drew Dr. Reusz to the pastime of refereeing.

“I liked [refereeing] when I did it; I enjoyed it and I’ve been doing it ever since,” said Dr. Reusz, a 1981 graduate of the University of Illinois at Chicago College of Dentistry.

It takes a real sports enthusiast to enjoy being a referee. Dr. Reusz played baseball in college, and so he refereed baseball and softball along with basketball when he first started. He soon had to drop baseball when the schedule of the games didn’t mesh well with his schedule as a dentist. For the past 15 years, Dr. Reusz has been doing strictly girls and boys basketball games. He is licensed by the Illinois High School Association.

“In the 35 years I’ve been doing this, probably north of I-80 there isn’t a high school gym I haven’t been in,” Dr. Reusz said.

To be a ref, he added, you have to have thick skin and know that 50 percent of the time people will disagree with you. And remember foremost that the game is there for the enjoyment of the kids.

“People will challenge you, but you have to be confident, be poised and have composure,” said Dr. Reusz.

Working a basketball game doesn’t come without its dangers, though, whether it is students tossing popcorn or Skittles at Dr. Reusz or having pop spilled on him.

He’s been lucky to have never been injured while refereeing a game.

However, in a rather intense girls basketball game a few years ago between Libertyville and Mundelein, Dr. Reusz ran in to call a foul following a shot. A player swung her arm up in a celebratory manner and clocked Dr. Reusz right in the nose.

“I did a half step forward, then a half circle and then went straight down to the ground. I shook my head and realized I was looking at the basketball floor. I didn’t realize it but she had knocked me out for about seven seconds,” said Dr. Reusz.

Despite the risks, there are many high points to refereeing. In 2003, Dr. Reusz was chosen to be one of three referees for the high school girls basketball state finals.

“That’s what everyone [who is a referee] aspires to do, to become a state final official, and I was able to get through it and I made it,” said Dr. Reusz. He also earned the Girls Basketball Official of the Year for Illinois 2009 Award.

But now that he has acc omplished that, Dr. Reusz’s next goal is to referee the boys state final.

There hasn’t been just one moment that made Dr. Reusz realize why he enjoys refereeing so much. It’s the atmosphere during a game and working with the kids that he enjoys the most.

“Your ideal basketball game is when you work up a good sweat, you’re really running up and down the floor with them. You’re having a great time, it’s a good game, you can joke around with the kids. And when the game is over everyone is cheering their team on and nobody is yelling at the referees,” said Dr. Reusz. 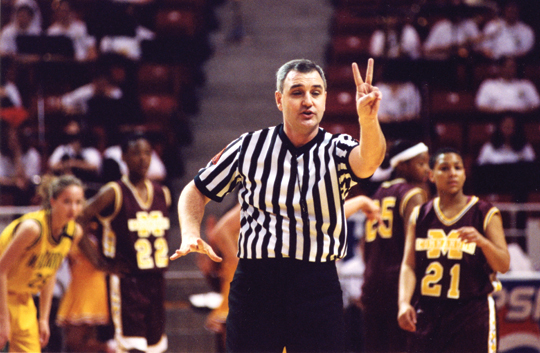