Barry Booth is a marathon man

It was only two and half years ago – shortly before his 50th birthday – that Barry Booth decided that running marathons was probably the best thing he could do for himself. Having been a casual runner for a long time, Dr. Booth, a 1984 graduate of the University of Illinois at Chicago College of Dentistry, started training for his first marathon.

Dr. Booth started his six-month training regimen in 2006. For five months he built up his endurance to run long distances, going as far as 20-22 miles three weeks before the big race. For the few weeks just before the marathon he “tapered down” by running only short distances to build up his legs.

When Dr. Booth completed his training, he ran the Chicago Marathon. He compared the marathon to being on a tour of all the highlights of the city. He started and finished in Grant Park, but ran as far north as Wrigley Field, as far west as the United Center, and as far south as U.S. Cellular Field. Dr. Booth completed his first marathon with a finishing time fast enough to pre-qualify for the Boston Marathon.

Training for the Boston Marathon threw in a different challenge that training for the Chicago one didn’t have: Boston has more hills. Dr. Booth did his hill training in Palos Hills at the old toboggan slides by running up and down the stairs to get used to the East Coast terrain he would encounter.

“In Boston, they bused us out 26 miles to the start of the race and then we ran toward the city,” said Dr. Booth “That’s what’s fun: (the marathons) are running tours of the city.”

After completing the New York City Marathon a year after running in Boston, Dr. Booth was well on his way to completing the World Marathon Majors. This three-year-old organization consists of the five oldest marathons in the world: London, Berlin, Chicago, Boston and New York City. Professional runners who complete all five marathons within two years receive points for their times. The runner with the lowest point total gets $1 million.

Dr. Booth doesn’t plan on being a professional runner going for $1 million, but he plans on doing all five races. Just this September he ran his fourth marathon in Berlin and has only one more to go. In April, he will run in London.

Dr. Booth turned two of his marathons into fundraisers for cancer research. He double-matched donations collected in his office – a total of more than $7,500 – to benefit the American Cancer Society and Memorial Sloan Kettering Hospital’s Aubrey Fund for pediatric cancer research.

Another benefit, traveling overseas for the marathons becomes a vacation when the race is over. Dr. Booth arrives a few days early to get over the jet lag before he runs, and after the race is done he makes time to sightsee.

“We stopped in Munich and rehydrated at Oktoberfest. Imagine a tent with 10,000-15,000 people standing on benches singing. Everyone is happy and no one is fighting,” Dr. Booth described.

If you’re thinking of taking up running or achieving a goal of running a marathon, Dr. Booth advised to start slowly and to build up gradually. He also suggested reading about running.

“I followed Hal Higdon’s marathon training guide. Online you can plug in the race and get a day-by-day training session.”

And after he finishes all five legs of the Marathon Majors, what is next on Dr. Booth’s plate?

“Triathalons. That is the next thing. But I have to finish this first!”
Categories :
Tags : 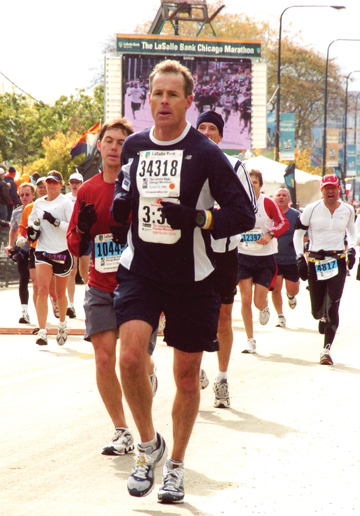