Heli-Boarding snowballs into a pastime for Mike Zak

With a population of only 425, Blue River, BC, sits 400 miles northeast of Vancouver. According to www.britishcolumbia.com, it lies in one of the world’s most productive snow belts for high-quality, reliable powder snow. So it makes sense with so much snow in the Cariboo Mountains to the north of Blue River, heli-skiing would be one of the most well-known sports the town offers.

Michael Zak, a 1987 graduate of the University of Illinois at Chicago College of Dentistry, has been skiing for the past 40 years. But only in the past two years has he tried heli-boarding, which is using a snowboard (instead of skis) to carve down a snowy destination, atop which a helicopter has dropped you off.

Michael ZakIntroducing Dr. Zak to this wild experience was his very own brother. “My brother is a very avid helicopter-skier,” Dr. Zak said.

The helicopter tour group the brothers use has access to 200 peaks in the Blue River area. Mountain peaks are at about 10,000 feet, and the tree line is much lower – 6,500 feet – because of how far north Blue River is.

The first time Dr. Zak took the helicopter up to the peak and landed, his first thought was “Where are my skis?” Looking out over the mountain ranges and distant peaks, only having snowboarded for nine years, skiing seemed like a safer option.

“It is really steep terrain and kind of puts you to the extreme of your comfort level. It’s a harrowing experience,” he described.

The excitement of skiing down glaciers and between trees brought him back for a second year of heli-boarding. Snowboarders and skiers are looking for the “uncut” snow, that which has been untouched. The helicopter brings you to different areas 10-15 times during the day and you ski down with a guide.

Skiing in the backcountry has its dangers, of course, one being avalanches. Everyone wears a beacon or a honing device and also carries avalanche packs that include tools to dig yourself out in case you get trapped.

If you’re up for the same challenge as Dr. Zak, he suggests, “Get comfortable on more intermediate and advanced slopes and then on all terrains. This is definitely a step above what you find at a ski resort.” 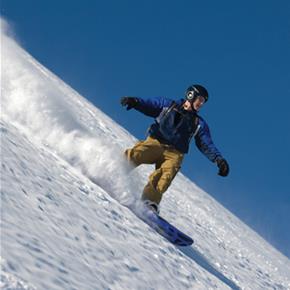