Many people consider their daytime job as the only thing they do professionally. Some people, however, strive to do more for the general welfare, and many times it is very different from what they do during the day.

For three CDS members, their days aren’t over when they leave their practices; instead they are out in their neighborhoods acting as community leaders.

Sheri Doniger, a 1983 graduate of the University of Illinois at Chicago (UIC) College of Dentistry, is a Lincolnwood Fire and Police Commissioner, a position very different than being a dentist. She has been in the position for five years.

Not knowing a lot about law enforcement or fire protection before taking the position, but still interested in it, Dr. Doniger took a 12-week citizen’s police academy class. There she was able to witness line-ups, participate in ride-alongs and watch how the police pursue suspects and talk to them.

“It’s a different world. I have the utmost respect for every police officer. You put your life on the line everyday,” she said.

As a commissioner, she is involved in the process of hiring entry-level officers and promoting sergeants. The meetings are usually at night, and Dr. Doniger can work it around her dental practice.

“I feel it is important to give back to the community you live in,” said Dr. Doniger. “You don’t become a community leader for personal gain, but for personal satisfaction.”

After Dr. Doniger graduated from dental school, she moved to north suburban Lincolnwood and became very active in her community. Her position as commissioner is a responsibility she doesn’t take lightly. Dr. Doniger feels that she is setting the tone for the safety of the future generations in Lincolnwood.

“I feel a part of being a good citizen is volunteering. And I feel we’re blessed in our [dental] profession to help the community out.”

James Discipio, a 1984 graduate of Loyola University School of Dentistry, is in his second term as the village president of west suburban La Grange Park.

He served on numerous CDS committees prior to becoming village president, but he also served as a commissioner on the Community Park District of La Grange Park Board of Commissioners and was elected to the elementary school board. When the previous president decided not to run for re-election, the residents of La Grange Park asked Dr. Discipio if he would be willing to serve.

Having previously had goals to follow in his father’s footsteps at CDS and possibly become a CDS president he said, “I couldn’t pass up the La Grange Park position. It was a wonderful opportunity.”

As village president, Dr. Discipio runs board meetings, attends functions to represent La Grange Park, and is involved with organizations that provide services to the village. Three nights out of the week he needs to attend meetings.

“It’s a balance. I needed to cut back a little to not go to all of the committee meetings,” Dr. Discipio said.

Being president, he explained, you have to have a vision for the community. You need to have empathy for the residents and make judgments and decisions with the best interests of the entire community.

“It is always a rewarding experience,” said Dr. Discipio. “I cherish that role.”

Despite the many meetings and the act of balancing family, his practice, and his presidency, the most fulfilling aspect of the job is being able to give back and see results.

Michael Schroeder, a 1980 graduate of UIC, has similar thoughts about giving back to his community. Dr. Schroeder is the Wheeling Township Supervisor. The township includes parts of Arlington Heights, Buffalo Grove, Mount Prospect, Prospect Heights and Wheeling.

“When you’ve been given a lot, you have the opportunity to give back to the communities that have given you so much,” he said.

Dr. Schroeder was born and raised in Arlington Heights over 50 years ago, and has participated in community activities and worked there. His father opened their dental practice in 1954.

When he’s not practicing dentistry, he is the CEO and CFO of the township. He is in charge of General Assistance, which provides social services for those township residents who have little to no income.

Having a dental practice in the community you are the supervisor of has its benefits. For one, your patients give you feedback on how the community is doing, Dr. Schroeder said. He hears about issues affecting everyday people living in the area.

“It is always nice to meld your occupation with these government positions. Bringing expertise from your own field to help you in the government arena has been very rewarding.”

He says he is fortunate that his dental office is less than two miles from his township office. And on Mondays he spends his day at the township office; he starts his Mondays with what he calls a “huddle meeting” in which all the department heads and administrators come together to talk about what happened the week before.

“It is not a full-time position,” Dr. Schroeder said, “and without e-mail or fax, it would be more difficult. But I can come over before work or at lunch to sign checks.”

He started the position at a time when they wanted a dental office in the township building to help the underserved. Dr. Schroeder saw the plans and knew immediately it wouldn’t work. Since then, a mobile dental clinic has been established and the township recently received a $140,000 grant to build out a space for a fixed site clinic in conjunction with Northwest Community Hospital, Wheeling Township, Palatine Township and Elk Grove Township.

“I really enjoy what I do here as township supervisor. This is a really good fit,” said Dr. Schroeder. 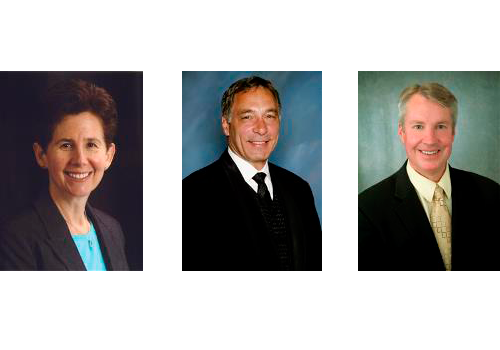